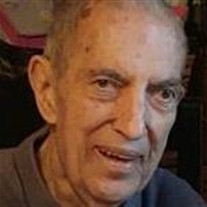 William A Robinson, Sr, age 86, of Richmond, IL, passed away suddenly Monday, September 25, 2017 at his residence. He was born in Oak Park, IL on June 9, 1931, a son of the late William and Helen (Hubbell) Robinson. He was married to Marilyn... View Obituary & Service Information

The family of William A. Robinson Sr created this Life Tributes page to make it easy to share your memories.

Send flowers to the Robinson family.