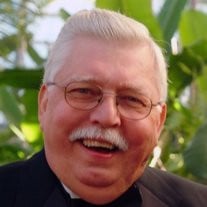 William C. Roback, age 70 of Maryville, TN, formerly of Richmond, passed away June 18, 2013 at Blount Memorial Hospital in Maryville, Tennessee. Bill Roback was born on June 22, 1942 in Chicago, Illinois to Peter and Dorothy (Kennedy) Roback. Bill served his country in the U.S. Army with the 18th Combat Engineer Brigade during the Vietnam War. He was awarded the Bronze Star for courage in combat and the Army Commendation Medal. He began his career in the field of lithographic arts, later founding a successful commercial printing company that he operated with his wife for 15 years. He became an accomplished printing plant manager and consultant. He served his Illinois and Tennessee communities through service on the Richmond Grade School Board of Education, VFW, and most recently as president of the Blount County, TN AARP. He was an active member of his parish, Our Lady of Fatima Catholic Church in Alcoa, TN. His determination, strength, and upbeat attitude in the face of adversity were an inspiration to those who knew him. Bill was a devoted husband and loving father and grandfather. He was preceded in death by his parents, one sister, six brothers, and an infant son, Kevin Michael Roback. He is survived by his loving wife of fifty years, Susan (Chesko) Roback; his three sons Jason (Linda), Bradley (Terri), and Andrew (Nicole); his grandchildren (Sachi and Nathan); as well as family and friends. The family will gather with friends Saturday, June 29, 2013 from 11a.m.-12 p.m. at Ehorn-Adams Funeral Home in Richmond, Illinois. Immediately following he will be laid to rest with military honors at Saint Josephs Cemetery in Richmond, Illinois. In lieu of flowers, donations may be made to St. Jude Children's Research Hospital under his name (http://stjudetributes.org). St. Jude Children's Research Hospital, 501 St. Jude Place, Memphis, TN 38105.

The family of William C. Roback created this Life Tributes page to make it easy to share your memories.

Send flowers to the Roback family.