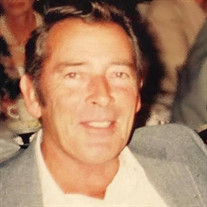 William Henry Krumpen, age 81, of Genoa City, WI, formerly Richmond, IL, passed away on August 18, 2020, surrounded by his family, after a short battle with bladder cancer. William was born February 26, 1939 in Bowling Green, Kentucky to Arthur and Emma (Lancaster) Krumpen. In 1939 they moved to Paris for about 10 years. He liked to tell people that he studied in Paris…TN that is. While his father and uncles were away at war; he, his mother and brother lived with aunts and cousins. Later they moved to Richmond, IL, where his father’s family was from. He graduated from Richmond-Burton Community High School in 1957, where he played the clarinet in the band and basketball on the court. He worked for his father, Art Krumpen & Sons from the age of 10 to 26. Then he and his brother, John, started Krumpen Builders. They built custom homes for over 50 years until they retired in 2008. William served in the army from 1964-1968 and was stationed at Fort Campbell. He married Karen Lenore Pitch on July 1, 1965 and they had 4 children. He is survived by his children Jennifer Watrous of Johnsburg, Deborah Moravec of Hebron, Rebecca Faller of Richmond, and William M Krumpen of Genoa City; his grandchildren Hailee and Alex Watrous, Justin and Jarrett Moravec, Joshua, Megan, and Amanda Faller, and Kennedy Krumpen; his brothers, John (Barbara) of New Lisbon, WI and Van (Val) of Genoa City, WI, his sister Patricia (the late Timothy) Etzkorn of Tulsa, OK, his brother-in-law Russell (Phyllis) Pitch of Paxton, IL and many nieces and nephews. He was preceded in death by his wife Karen in 1987, his father and mother, his father-in-law and mother-in law Oliver and Georgina Pitch, his sisters-in-law Linda Krumpen and Arlene Pitch. He enjoyed country music and rock-n-roll. He sang and played the guitar and was in several bands over the years, the last of which was the Visions with his brother, nephew, and wife. He really liked the Venture's instrumental music and the Visions played a lot of those songs. He has a collection of 20+ guitars. For over 30 years he enjoyed snowmobiling and was a member of the Richmond Trailblazers. He had many motorcycles throughout the 40 years that he rode them. In the early 80's, he and Karen both had motorcycles and took many weekend trips along the Mississippi River. He was a very good tennis player and would always beat his brother John. He enjoyed watching professional tennis. He also was on a bowling league for many years at the Richmond Bowl, where he met his wife. The last 10 years he spent a lot of time bicycling and working out at the YMCA. A Memorial Visitation will be from 11:00 a.m. Saturday Aug. 22, 2020 until the Celebration of Life at 2:00 p.m. at Ehorn-Adams Funeral Home in Richmond. Due to the pandemic, masks and social distancing will be required. Private family inurnment will be at Richmond Cemetery with military honors. In lieu of flowers, donations may be made to Richmond-Burton Community High School.

The family of William H. Krumpen created this Life Tributes page to make it easy to share your memories.

Send flowers to the Krumpen family.