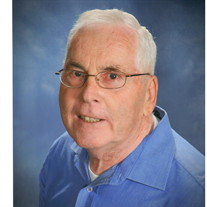 William E. Harm, 81, of Richmond (Solon Mills), IL, passed away Friday, September 2, 2016 at Burr Oak Manor, Genoa City, WI. William Earl was born in Spring Grove, IL on July 8, 1935, a son of the late Earl and Hattie (Risch) Harm. A lifetime resident of the Spring Grove/Richmond area, he was a 1953 RBCHS graduate and inducted into the US Navy in 1956 of which he proudly served as a Communications – Teleman through1957. He was married to Marjorie Steadman on Sept. 24, 1960, at Grace Lutheran Church in Richmond, Illinois. A devoted husband and father, cherished grandfather and great-grandfather he was also known for his ability to fix anything and to help anyone at anytime. William worked in the HVAC industry for many years; owning his own business at one time as well as working for many others. He worked for the Richmond/Spring Grove School Districts and served on the Richmond Grade School board. He also served as a Boy Scout leader and as an active member of Grace Lutheran Church, Richmond, Illinois. Survivors are a daughter Bonnie (Michael) Rabelhofer, of Richmond, IL; three sons, Scott Harm, of Twin Lakes, WI; Jeffery (Jane) Harm, of Neenah, WI; Lance Harm, of Woodstock, IL; five grandchildren: Jonathan, Megan, and Matthew Rabelhofer, Morgan Harm and Tyler Harm, one great granddaughter, Vegas Harm and a brother Harold (Donna) Harm of Spencer, Wisconsin. He was preceded in death by his wife Marjorie, a granddaughter Deidre Harm and daughter-in-law Kimberly Harm. Memorial visitation will be Wednesday September 21, 2016 at 5:00 pm until the Celebration of Life at 6:00 pm at Grace Lutheran Church, 6000 Broadway in Richmond including military honors. Pastor Andrew Tyrrell will officiate with a dinner reception following the service. In lieu of flowers, memorial contributions may be made to Grace Lutheran Church, 6000 Broadway St, Richmond, IL 60071. Inurnment will be in private at the Greenwood Cemetery, Greenwood, IL at a later date. For information, please call 815 678-7311 or visit www.ehornadams.com.

The family of William E. Harm created this Life Tributes page to make it easy to share your memories.

Send flowers to the Harm family.