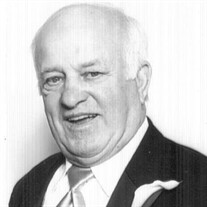 William G. Hansen, age 80, of Richmond, Illinois, died peacefully in his home the evening of November 16, 2017. He was born March 14, 1937 "on the first farm south of Hebron on Highway 47" to Lawrence and Hilma (Anderson) Hansen. His family moved to a farm at a Richmond address on Highway 173 when Bill was 9. He attended school in Hebron, graduating from Alden-Hebron High School in 1955. He was on the JV Basketball team when the Hebron Giants won the famous State Championship, and was always proud to consider those five winners his friends. He joined 4-H, where he met life-long friends and participated in many projects, showing animals and winning awards at the McHenry County Fair. Other school activities include baseball, Student Council, Yearbook Staff, Future Farmers of America as both a member and serving as president. He was Junior Prom King,1954. He attended University of Illinois, taking Short Courses in farming practices. He farmed in the area all his life, loving every moment he could spend plowing, planting, or harvesting. He worked for his father while he bought his first farm and purchased all the acres he could after that. Posted on his office wall is a saying about land attributed to a Native American Sioux: "Behold this and always love it! It is very sacred, and you must treat it as such..."His own favorite statement about land was, "They're not making any more of it." He was a member of the McHenry County Farm Bureau and looked forward to the times he cooked hamburgers at the fair for the Farm Bureau Food Stand. He was a Bears and Cubs fan, he bowled "with the guys" in Zenda, Wisconsin for many years, and later with his wife on a couple's league The Sunday Happy Mixers, that was mostly farmers. Bill married Carol Mae Hoffman February 10, 1973 at Genoa City, Wisconsin. Carol survives him. He is also survived by two sons, William L (Sasha Zolnowsky) and their sons, Brady and Cooper of Lakeville, MN, and Daniel (Cori Svitak) and their sons, Hunter, Max, Levi, and Lucas of Genoa City, WI, a sister, Virginia (Roger) Bottlemy, sister-in-law Carol June Hansen (Tony) DeMarco, brother-in-law David (Susan) Hoffman, and four nieces and eight nephews. He was preceded in death by his parents, a sister Ardella (Glen) Spooner and brothers Lawrence Junior and Richard (Carol) Hansen. A memorial service celebrating his life will be held at 5 p.m. Thursday November 30, 2017 at the Wonder Lake Bible Church, 7511 Howe Road, Wonder Lake IL 60097, with visitation starting at 3:30 p.m. In Lieu of flowers, memorials may be made to the Richmond Rescue Squad or the Richmond Food Pantry.

William G. Hansen, age 80, of Richmond, Illinois, died peacefully in his home the evening of November 16, 2017. He was born March 14, 1937 "on the first farm south of Hebron on Highway 47" to Lawrence and Hilma (Anderson) Hansen. His family... View Obituary & Service Information

The family of William G. Hansen created this Life Tributes page to make it easy to share your memories.

Send flowers to the Hansen family.