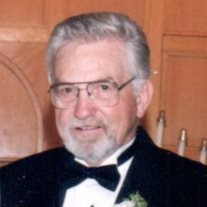 Walter "Bud" Barber, 84, of Richmond, IL, passed away Wednesday, March 5, 2014 at Good Shepherd Hospital, Barrington, Illinois. He was born in Woodstock, Illinois on October 25, 1929, the son of the late George and Martha (Fink) Barber. Walter was a graduate of Richmond-Burton High School in 1949. He was married to Audrey C. Aubert on Oct. 21, 1950 in Richmond and she preceded him in death on Aug. 26, 2002. He was a lifetime dairy farmer retiring in 1992. He was a member of the Wisconsin Dairies and the McHenry County Farm Bureau, where he served on the Board of Directors from 1990 to 195. He was a member of Community Church of Richmond Richmond, and a former member of Richmond Fire/Rescue Department. He loved woodworking, dancing, was an avid bowler and delivered Meals on Wheels. One of his passions was aviation. Walter is survived by a daughter, Julie (Dan) Wenninger, of Barrington, IL; a son,Rick (Cheryl) Barber, of Richmond, IL; three grandchildren Chris (Christina) Barber of Twin Lakes, WI, Ashley Barber of Wauconda, IL, Brandon Barber of Cortland, IL; three great grandchildren Ava, Logan and Leah Barber; his beloved friend Mary Gosse and his dogs Smokey and Mittens. He was preceded in death by his parents and a sister Frances Stinek. Visitation will be from 2 to 6 p.m. Sunday, March 9, 2014 at Ehorn-Adams Funeral Home 10011 Main St Richmond. Funeral service will be at 11:00 a.m. Monday March 10, 2014 at Ehorn-Adams Funeral Home, Richmond, IL, with Rev. Hope Molozaiy officiating. Interment will be in Richmond Cemetery in Richmond, IL. In lieu of flowers, memorial contributions may be made to Richmond Fire/Rescue District 5601 Hunter Dr., Richmond, IL 60071, the Community Church of Richmond, 5714 Broadway, Richmond, IL 60071 or an animal rescue of your choice. For information, please call 815 678-7311 or visit www.ehornadams.com.

The family of Walter "Bud" Barber created this Life Tributes page to make it easy to share your memories.

Send flowers to the Barber family.