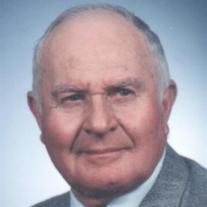 Hebron, IL Virgil L. "Spike" Stanley, Jr Virgil "Spike Stanley, Jr, 83, of Hebron, IL, passed away Tuesday, October 16, 2012 at his home. Virgil was born in Rockford, IL on May 3, 1929, a son of the late Virgil and Marguerite (Johnson) Stanley, Sr He was a gradute of Alden-Hebron High School in 1948. He was married to Irene Schoenbeck on April 14, 1951 in Harvard, IL. He worked as a self employed dairy farmer for 43 years retiring in 1996 and crop farmed until this fall. He was a member of St. John's Lutheran Church in Woodstock, IL. He served as DHIA President, was a salesman for McNess Feed from 1975- 2012, a member of Genoa City Snowmobile Club and Alden-Hebron Grange for over 25 years, He loved to camp and fish in northern Wisconsin, enjoyed refinishing tractors and woodworking. He served in the U.S. Army as a Sgt in the artillery in the Korean War and was a member of Sponholtz-Deignan American Legion Post #183 in Genoa City, WI. Virgil is survived by his wife Irene, a daughter, Brenda (James) Heibel, of Compton, IL; a son,Dale, (Darlene) Stanley, of Hebron; three grandchildrenJennifer (Jim) Stoerp of Genoa City, WI, Ryan Stanley of Genoa City and Brandon (Janelle) Berg of Hebron; three great grandchildren Justin and Jevan Stoerp and Madison Berg; a sister Patricia Meyers of Sheridan, WY and nieces and nephews. Visitation will be from 3 to 8 pm. Friday at Ehorn-Adams Funeral Home 10011 Main St in Richmond. Funeral service will be 11:00 am Saturday October 20, 2012 at Ehorn-Adams Funeral Home, Richmond with Rev. Harold Ross officiating. Military honors will follow. In lieu of flowers, memorial contributions may be made to St. John's Lutheran Church 401 St. John's Rd Woodstock, IL or to the charity of one's choice. For information call 815 678-7311 or visit www.ehornadams.com

The family of Virgil "Spike" Stanley Jr. created this Life Tributes page to make it easy to share your memories.

Send flowers to the Stanley family.