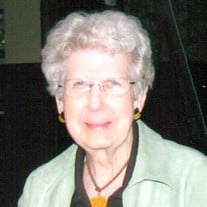 Virgene Motley Ehorn-Weber, age 99 of Richmond, IL, passed away on Thursday April 7, 2016 at Valley Hi Nursing home in Woodstock, IL. She was born on October 31, 1916, in Richmond, IL, the daughter of the late Frank and Jessie (Dike) Motley. She and her family were lifelong residents of Richmond. She graduated from Richmond High School in 1934 and was married to Theron "Pete" Ehorn at her family home on July 13, 1938. They were married for 44 years when he passed away on March 14, 1984. She married Raymond C. Weber Jr. on May 8, 1987 in Richmond and he passed away Sept. 30, 1987. Virgene was employed at the State Bank of Richmond for 17 years and at the Richmond Post Office for nine years. She worked and was a partner with her husband in Ehorn Funeral Home (presently Ehorn-Adams) for over 60 years. At age 18, Virgene joined and became a lifelong member of the Eastern Star, where she held the office of Treasurer for many years. She was a Rotary Ann of the Richmond Rotary Club. She was a member of the Richmond American Legion Women's Auxiliary, the McHenry County Historical Society and an active member of the Royal Neighbors of America. She was a member of the Community Church of Richmond, where she sang in the choir for many years and was active in many committees of the church. Virgene is survived by three nephews Gary (Gail) Motley of Wyomissing, PA, Gene (Evelyn) Motley of Tracy, CA, Denny (Joyce) Ehorn of Greenwood, IL; two nieces Diane Role of Lead Hill, AK and Joan Ehorn of Richmond. Also surviving are great nieces Melissa (Brent) Calhoun and Rebecca (Mark) Gresh, both of Wyomissing, PA, Amy (Mike) Crotts and Lisa (John) Jackson, both of Tracy, CA, Laurie Suhrke of Plymouth, WI, Kathy Ehorn of McHenry,IL and Mary Fisher of Lead Hill, AR. Three great nephews also survive, Rory Motley of Victoria, TX, Jon Role and Mark Role both of Reno, NV. Also surviving are her stepchildren and their families, from her marriage to Raymond Weber. She was preceded in death by her parents, her first husband Theron Ehorn, her brother Wiliam Motley and sister-in-law Mary Motley. Also preceding her was her second husband Raymond Weber and two stepsons. Virgene was a kind, loving, honest, compassionate lady who never had an unkind word to say about anyone. Many called her a guardian angel; she was always helping others and was a true friend to many. She will be greatly missed by all who knew and loved her. We wish to thank the staff at Valley Hi for the wonderful care and kindness shown to Virgene during her years there. We also thank JourneyCare for coming in to help make her last days better. We appreciate all everyone has done for her. Visitation will be from 9:00 a.m. until 11:30 a.m. Thursday April 28, 2016 at Ehorn-Adams Funeral Home 10011 Main St in Richmond. Funeral service will follow at 11:30 a.m. Thursday April 28, 2016. Rev. Hope Molozaiy will officiate. Interment will be in Richmond Cemetery in Richmond, IL. Memorials may be made in her name to the Community Church of Richmond, 5714 Broadway, Richmond, IL 60071.

Virgene Motley Ehorn-Weber, age 99 of Richmond, IL, passed away on Thursday April 7, 2016 at Valley Hi Nursing home in Woodstock, IL. She was born on October 31, 1916, in Richmond, IL, the daughter of the late Frank and Jessie (Dike) Motley.... View Obituary & Service Information

The family of Virgene Ehorn-Weber created this Life Tributes page to make it easy to share your memories.

Send flowers to the Ehorn-Weber family.