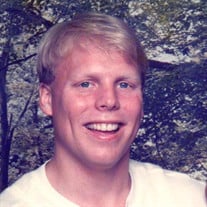 Stephen R. Garrelts, 54, of Spring Grove, IL, lost his battle of six years to ALS on Tuesday, March 24, 2020 at Northwestern Hospital, McHenry, IL. Stephen was born in McHenry, IL on September 30, 1965, a son of Joanne (Hughes) and the late Richard Garrelts and graduated from Marian Central Catholic High School. For the past 25 years, he was devoted to the love of his life, Evelyn Mendiola. This journey began on on May 20, 1994, at St. Mary's in McHenry, IL. He was a member of St. Joseph Catholic Church Richmond, IL and a former parishioner at St. Mary's in McHenry and Christ the King in Wonder Lake, where he was a member of the Knights of Columbus. He was a master plumber, owner of Garrelts and Sons Plumbing, Heating and Water Treatment Inc. of McHenry, IL. Stephen is survived by his wife Evelyn; two daughters, Gabriella Garrelts and Vanessa Garrelts, both of Spring Grove, IL; two sons Stephen Garrelts II, of Indianapolis, IN; Marcus Garrelts, of Wonder Lake, IL; his mother Joanne Garrelts of McHenry, IL; a sister, Gloria (Charles) Caner, of McHenry, IL; three brothers, Dale Garrelts and James (Pamela) Garrelts, both of McHenry, IL; Alan Garrelts, of Wonder Lake, IL. He was preceded by his father, Richard. His devotion to his family was an inspiration to all who were blessed to know him. He lived out his faith every day of his life. His ability to celebrate life and God's blessing each day was treasured by all who knew him. Everyone who walked into the Garrelts's home felt Steve's warm welcome by his big smile and even larger laugh. You only had to meet him once to know him forever. Steve's wonderful sense of humor and infectious spirit could fill a room. Joy, love and laughter surrounded Steve and anyone who was lucky enough to be around him. His spirit, his soul and his amazing ability to love is still with us. It lives on in the stories people are sharing ow how he touched their lives, in the love that is visible in the eyes of his family and friends and in the spirit and resilience of his children. Things will never be the same - but the world is better for the years this wonderful man lived. Private services will be for the family on March 31, 2020 at St. Joseph Catholic Church in Richmond. Private family interment will be in St. Mary's Cemetery in McHenry, IL. A Memorial Mass and luncheon will be held at a later date to honor Steve due to the current circumstances of Covid-19. In lieu of flowers, donations can be made in memory of Stephen R. Garrelts to the Team Gleason organization for ALS. Here is the link: http://teamgleason.org/garrelts"

Stephen R. Garrelts, 54, of Spring Grove, IL, lost his battle of six years to ALS on Tuesday, March 24, 2020 at Northwestern Hospital, McHenry, IL. Stephen was born in McHenry, IL on September 30, 1965, a son of Joanne (Hughes) and the late... View Obituary & Service Information

The family of Stephen R. Garrelts created this Life Tributes page to make it easy to share your memories.

Send flowers to the Garrelts family.