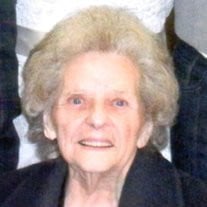 Shirley M. Patnaude, 89, of Hebron, IL, passed away Tuesday, November 26, 2013 at her son's in Cary, IL. Shirley was born in Batavia, IL on September 13, 1924, a daughter of the late Kenneth and Evelyn Mead. She was married to Francis "Pat"... View Obituary & Service Information

The family of Shirley M. Patnaude created this Life Tributes page to make it easy to share your memories.

Send flowers to the Patnaude family.