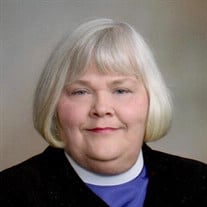 The Reverend Sherry Louise (Past) Hoening The Rev. Sherry Hoening, age 72, (although she always said she was 27) of Sun Prairie, Wisconsin, formerly of Richmond, Illinois, loving wife, mother and caretaker of God’s children joined her Heavenly Father on February 19, 2019.   Sherry was born in Chicago, Illinois on July 27, 1946.  She was a 1964 graduate of Palatine High School. During her high school years, Sherry met the love of her life, Chuck.  They married on August 14, 1965, at Immanuel Lutheran Church in Palatine, Illinois. Chuck and Sherry grew their big family of best friends.  They juggled their schedules to focus on nurturing their family which included dinners together, Sunday worship, camping trips and many other adventures.  After having her 7th child, Sherry went to college to pursue her childhood dream of becoming a nurse. Her energy level, work ethic, and passion were a perfect match for the many years she worked as an intensive care nurse. While working full time, Sherry was active in the community supporting her children in their many activities. In addition, she served in leadership roles at the church and on the school board.  After losing Chuck to cancer in 1998, Sherry chose to refocus her energies from healing others physically to guiding them spiritually. She attended Wartburg Seminary, graduating in 2005. With her small town experience, living in Richmond, Illinois, Sherry was well suited to serve as pastor to congregations in Leland, Illinois, Adams and Big Flats, Wisconsin. Sherry is preceded in death by her loving husband, Charles Sr., her parents, Earl and Dorothy (Schroeder) Past, brother, Robert Past and son-in-law, Jerry “Bret” Godsby.  She is survived by her children, Winona Gram, Issaquah, WA, Jenny (John) Conway, Lake in the Hills, IL, Samantha Godsby, Capron, IL, Charles (Amy) Hoening, Jr., Rockford, IL, Thaddeus Hoening, Readstown, WI, Andrea (Mustafa) Farladzhov, DeForest, WI and Nicholas (Tara) Hoening, Madison, WI, grandchildren, Alanna, Aaron, Devon, Emily, Jared, Heather, Brynn, Grace, Elijah, Tate, Liv, Hannah, her brothers, Richard (Anna) Past, Jonathan (Lynn) Past, Steven (Denise) Past; her dog, Acadia, and other beloved family and friends. The visitation will be held in her honor on Monday, February 25, 2019 from 4:00 to 8:00 p.m. at Ehorn-Adams Funeral Home, 10011 Main Street, Richmond, IL. The funeral service will be held at Trinity Evangelical Lutheran Church, 504 East Diggins Street, Harvard, IL, on February 26, 2019 beginning at 11:00 a.m. with the burial immediately following, at the Richmond cemetery, Richmond, IL. *Clergy are invited to vest and wear red stole.   In lieu of flowers, the family requests donations be made, in support of Sherry’s passion to care for all God’s children, to Lutheran World Relief or ELCA World Hunger/Good Gifts.

The Reverend Sherry Louise (Past) Hoening The Rev. Sherry Hoening, age 72, (although she always said she was 27) of Sun Prairie, Wisconsin, formerly of Richmond, Illinois, loving wife, mother and caretaker of God&#8217;s children joined her... View Obituary & Service Information

The family of Rev. Sherry L. Hoening created this Life Tributes page to make it easy to share your memories.

The Reverend Sherry Louise (Past) Hoening

Send flowers to the Hoening family.