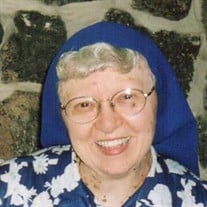 Sister Ruth M. May, OSF, 89, of St. Francis, WI passed away Saturday, May 21, 2016 at School Sisters of St. Francis in St. Francis, WI. She was born in Ringwood, IL on October 18, 1926, a daughter of the late George and Mary (Meyer) May. She was a graduate of McHenry High School-Class of 1944, becoming a novice with the Sisters of St. Francis in Sept. 1944. She professed her vows in 1947 and taught first grade at Sacred Heart and St. Gerard until 1951. While teaching, she earned a degree in English and a master's in reading from Cardinal Stritch University, where she served as teacher, clerical assistant and receptionist/secretary for 20 years. In 1984, she became the sisters' coordinator at St. Ann Health Center for seven years. After another 19 years in various capacities for the Sisters in St. Francis Community Motherhouse, retiring in 2010. Sister Ruth is survived by a sister, Clarice (Eugene) Miller, three brothers, Ronald (late Penny) May, Kenneth (Chris) May, Everett (late Mary Lou) May, many nieces and nephews and the Sisters of St. Francis of Assisi. She was preceded by a brother Donald May. Visitation will be from 9:00 a.m. Thursday June 2, 2016 at St. Peter's Church 2118 Main St. Spring Grove until the Mass of Resurrection at 10:30 a.m. Msgr. Joseph Jarmoluk will officiate. Interment will be in St. Peter's Cemetery in Spring Grove, IL. Memorials may be made to Sisters of St. Francis of Assisi Memorial Fund 3221 S. Lake Dr, St. Francis, WI 53235.

The family of Sr. Ruth M. May created this Life Tributes page to make it easy to share your memories.

Send flowers to the May family.