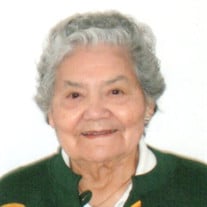 Ruth N. Fletcher, age 94 of Elkhorn, WI, formerly of Genoa City, passed away Thursday May 29, 2014 at Lakeland Health Care Center at Elkhorn, WI. Ruth was born August 23, 1919 in Bixby Township, Oklahoma a daughter of the late John and Maymie (Gibson) Haikey. She was a graduate of Hyde Park High School in Chicago. She was married to William O. Fletcher Sr. on Jan. 1, 1941 in Chicago and he died Oct. 11, 1999. She and her husband owned and operated Fletcher's Laundry in Genoa City, WI., for 50 years with her retiring in 1991. She was a member of First United Methodist Church in Genoa City, WI. Ruth is survived by a daughter, Terry (Edward) Marben, of Hubertus, WI; two sons Donald Fletcher, of Wheeling, IL; William (Judy) Fletcher Jr., of Appleton, WI; four grandchildren and two great-grandchildren, plus a sister Wilma (Robert) Johns, of Lake Bluff, IL. She was preceded by a son Jay Fletcher, a sister Edna Haikey and a brother John B. Haikey. Memorial visitation will be from 11:00 am until the memorial service at 1:00 pm Saturday, June 14, 2014 at Ehorn-Adams Funeral Home in Richmond, IL. Rev. Lucinda Alwa will officiate. Inurnment will be in Liberty Cemetery, 11001 Antioch Rd, Trevor, WI.

The family of Ruth N. Fletcher created this Life Tributes page to make it easy to share your memories.

Send flowers to the Fletcher family.