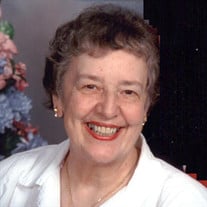 Rosemary Buffo, 90 of Twin Lakes, WI passed away Wednesday August 4th at Froedtert South, St Catherine’s Campus in Pleasant Prairie. Born in Chicago on September 17, 1930 she was the daughter of the late Michael and Rose (Thiel) Engst. She graduated from Immaculata High School in Chicago in 1949. After graduating Rosemary attended a college accredited night school for 2 years. Rosemary was a Purchasing Expeditor at Teletype Corporation for many years. She also worked many temporary assignments in the WI – IL area for 15 years. She was married to John Buffo at St. Benedicts Catholic Church in Chicago on October 17, 1953. In 1973 the family moved to Twin Lakes, WI. She enjoyed working in her rose garden, painting, bowling and shopping. She was a devout Roman Catholic and a member of St. Joseph’s Catholic Church Alter and Rosary Society. She was also a member of Telephone Pioneers of America. Rosemary is survived by her 2 daughters, Pamela Maloney of Edmond, OK, Debbie (Ron) King of Twin Lakes, WI and a son John (Renia) Buffo of Neshkoro, WI, 7 grandchildren, and 12 great – grandchildren. Rosemary was preceded in death by her husband, John, her parents, her brother Michael, and many aunts, uncles, and cousins. In lieu of flowers Memorials may be sent to St. Joseph’s Catholic Church in Richmond, IL, or the La Salette Missionaries and Shrine in Twin Lakes, WI. Visitation is on Tuesday August 10th from 4:00 pm to 8:00 pm and Wednesday August 11th at 9:00 am before the funeral. Ehorn – Adams Funeral Home at 10011 N Main St (Hwy 12), Richmond, IL funeral at 10:30 am at St. Joseph’s Catholic Church, 10519 N Main St, (Hwy 12) Richmond, IL. Interment to follow services.

The family of Rosemary M. Buffo created this Life Tributes page to make it easy to share your memories.

Send flowers to the Buffo family.