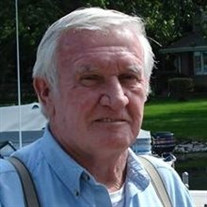 Roger T. Harris, 71, of Hebron, IL, passed away Friday, August 8, 2014 at Centegra Hospital Medical Center, Woodstock, IL. He was born in Pontiac, IL on September 9, 1942, a son of the late Harold and Bessie (Platt) Harris. Roger worked as a foreman at Arrow Aluminum Castings in Woodstock, for 46 over years. He had an undying love of fishing, hunting, outdoor activities, air shows and the Green Bay Packers. He served in the US Air Force as an Airman 2/C aircraft mechanic during the Vietnam War from June 1960 to June 1964. Roger is survived by a daughter, Gayl (Mark) Kelly, of Rockford, IL; a son,Kevin (Melissa) Harris, of Delavan, WI; four grandchildren Jessica and Brett Kelly, Dianna Beatty and Wyatt Harris; two sisters, Betty Simmons, of Woodstock, IL; Judy (Dony) Lemmerhirt, of Sharon, WI; a brother-in-law Jim Lalor of Woodstock, plus many nieces and nephews. He was preceded by an infant son William, a sister Patricia Lalor, and a brother-in-law Dennis Simmons. Visitation will be from 4 to 8 p.m. Monday August 11, 2014 at Ehorn-Adams Funeral Home 9625 Main St Hebron, IL. Mass of Resurrection will be at 10:30 am Tuesday, August 12, 2014 at St. Patrick of Hartland, Hartland, IL. Fr. Thomas Doyle will officiate. Interment will be in St. Patrick Cemetery in Hartland, IL. In lieu of flowers, memorial contributions made to the family would be appreciated.

The family of Roger T. Harris created this Life Tributes page to make it easy to share your memories.

Send flowers to the Harris family.