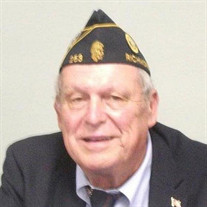 Robert E. "Bob" Howe, Jr, 80, of Wonder Lake, IL, passed away Saturday, January 8, 2022 at Northwestern McHenry Hospital, McHenry, IL. He was born in Woodstock, Illinois on April 4, 1941, a son of the late Robert E. and Blanche (Shales) Howe, Sr. He was married to Barbara Winn on Dec. 30, 1983, in Woodstock, IL. He was a member of Community Church of Richmond in Richmond, IL. He graduated from Keystone Grade School in 1955, then graduated from Richmond-Burton High School in 1959. During freshman and sophomore years, he played six man football and in junior and senior years it went to eleven man football. He also played basketball and was active in FFA and 4-H. He was a director on Indian Ridges Subdivision Board for 17 years, in charge of the Indian Ridge beaches and the subdivision roads. He also belonged to the Richmond Jaycees for a few years. He served in the U.S. Army from November 1963 to November 1965. He was a Paid-Up-For Life member of the American Legion. He was Commander of Paul C. Hoffman Post #253 from 1988 to 2017. He served as McHenry County Commander 1995-1996, 11th District Commander 1995-1996 and 2nd Division Commander 2011-2012. He served on the Veterans Assistance Commission for 20 years, chairman for four years. He was a water well contractor for over 40 years. He worked for McHenry County Well and Pump, bought the business and operated it for ten years, retiring in 2009. He was a member of Illinois and Wisconsin Water Well Associations. Bob is survived by his wife Barbara, two daughters Janene "Sis" ((Kevin) Ellis; Ellen (Anthony) Miraldi; a son Warren (Gretchen) Howe; two stepchildren Scott (Diane) McPherson and John (Angel) McPherson; 15 grandchildren and 17 great grandchildren and a brother Earl (Judy) Howe and several cousins. Visitation will be from 10:00 am Saturday Jan. 15, 2022 until the service at 1:00 p.m. at Ehorn-Adams Funeral Home 10011 Main St, Richmond with Rev. Katherine Karach officiating. Military honors will follow. Interment will be at Windridge Cemetery in Cary. In lieu of flowers, memorial contributions to Community Church of Richmond P.O. Box 246 Richmond, IL 60071 or Paul C. Hoffman American Legion Post #253 P.O. Box 14 Richmond, IL 60071. For information please call 815 678-7311 or visit www.ehornadams.com.

The family of Robert E. Howe Jr. created this Life Tributes page to make it easy to share your memories.

Send flowers to the Howe family.