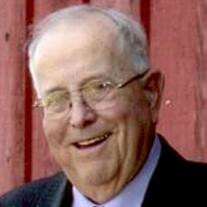 Robert Button, Jr., age 69, of Hebron died Friday, April 22, 2011 while in the company of family members at his residence. Robert was born in Hebron, IL on August 24, 1941, the son of the late Robert and Jennie (Pearson) Button. He was married to Dorothy Nelson-Stubbs on May 17, 1991 in Hampshire, IL. He was a graduate of Alden-Hebron High School in 1959. He worked as a truck driver for 35 years retiring in 2002. He drove for Ogelman Milk Transer, Triangle Transit, Harry Unverzagt, Boncosky Transportation, Cotter and Co, Don Bass Trucking and Tonyan Brothers Trucking. He was with the Hebron Police Dept for 18 years and was also a Cub Scout leader. He was a past officer of the Alden-Hebron Grange. He was a member of Linn Presbyterian Church Lake Geneva, WI. He was also a member of Chapel of the Highway Ministry. Robert is survived by his wife Dorothy, three daughters, Elizabeth (Don Stegner) Button of Genoa City, WI, Jessica (Lee) Schnurr of Darien, WI, Tonya Burch of Clinton, IL; five sons David (Jo Kindlesparker) Button of Lake in the Hills, IL, Richard (Molly) Button of Fontana, WI, Thomas (Christie) Stubbs of Wheaton, IL, Andrew (Andrea Salter) Stubbs of Pell Lake, WI, Randal (Jennifer) Stubbs of Pingree Grove, IL, 16 grandchildren and a sister-in-law Ann Button of Ingleside, IL. He was preceded by his parents, a sister Roberta Button Sparks, a brother Duane Button, a stepson Timothy Burch and a brother-in-law Earl Sparks. Visitation will be from 4 pm until the service at 7 pm Wednesday April 27, 2011 at Ehorn-Adams Funeral Home 9625 Main St. Hebron with Rev. Kit Stanek officiating. Memorial contributions may be made to Hebron-Alden-Greenwood Fire Protection District 12302 IL. Route 173 Hebron, IL 60034 or Heartland Hospice 6885 Vistagreen Way Rockford, IL 61107-5657 ehornadams.com

Robert Button, Jr., age 69, of Hebron died Friday, April 22, 2011 while in the company of family members at his residence. Robert was born in Hebron, IL on August 24, 1941, the son of the late Robert and Jennie (Pearson) Button. He was... View Obituary & Service Information

The family of Robert Button Jr. created this Life Tributes page to make it easy to share your memories.

Send flowers to the Button family.