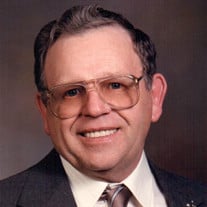 Robert L. Brennan, 84, of Richmond, IL, passed away Thursday, May 15, 2014 while in the company of family members, at his home. He was born May 24, 1929, in Woodstock, Illinois a son of the late William and Georgia (Vogel) Brennan. He was a graduate of McHenry High School in 1947. After graduation, he operated a dairy farm. Later he became an auctioneer and bought calves. He worked many years at Northern Pump Hereford Farm, then for McHenry FS, retiring in 1989. He played fast pitch softball for many years with the Ringwood team in the Genoa City league. He loved harness racing and was an avid White Sox fan. Robert was married to Dolores (Lor) Schmitt Feb. 3, 1951 at St. Mary's Church in McHenry by Monsignor Charles Nix and she died June 1, 1987. He married Ruth Henne Harrison on Jan. 18, 1989 in Sun City, AZ. Robert is survived by his wife Ruth; two daughters, Patricia (Harry Jr) Buchert, of Genoa City, WI; Linda (Jeff) August, of Elkhorn, WI; a son, Robert (Sue Mueller) Brennan, of Baraboo, WI; a granddaughter Laura August of Elkhorn; a sister, Mary Ann (Jim) Wegener, of McHenry, IL; a brother-in-law Richard (Helen) Schmitt of McHenry, two sisters-in-law Doris (the late William) Brennan of McHenry, Joanne (Loren) Kelley of Orlando, FL and a large circle of cherished nieces and nephews. He was preceded by his father William, his mother and her second husband Fred Wiedrich; sisters Georgia (Phelps) Saunders, Helen (Lou) Winn, Betty (Jack) Leonard and brothers Charles "Muck" (Doe) , Jim and Jack Brennan. Visitation will be from 4 to 8 p.m. Monday May 19, 2014 at Ehorn-Adams Funeral Home 10011 Main St Richmond. Funeral service will be at 10:30 a.m. Tuesday May 20, 2014 at Grace Lutheran Church 6000 Broadway in Richmond, with Pastor Andy Tyrrell officiating. Interment will be in Ringwood Cemetery in Ringwood, IL. In lieu of flowers, memorial contributions may be made to Richmond Fire/Rescue District 5601 Hunter Dr Richmond, IL 60071. For information please call 815 678-7311 or visit www.ehornadams.com

Robert L. Brennan, 84, of Richmond, IL, passed away Thursday, May 15, 2014 while in the company of family members, at his home. He was born May 24, 1929, in Woodstock, Illinois a son of the late William and Georgia (Vogel) Brennan. He was... View Obituary & Service Information

The family of Robert L. Brennan created this Life Tributes page to make it easy to share your memories.

Send flowers to the Brennan family.