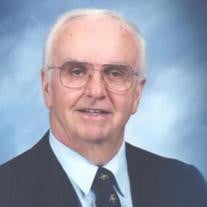 Ray J. Anderson, 79, of Richmond passed away Monday, January 16, 2012 while in the company of family members at his residence. Ray was born in Richmond, IL on September 29, 1932, the son of the late Harry S. and Ardella E. (Bartholf) Anderson. He was a graduate of Richmond-Burton High School in 1950, attended Northwestern University for a year, graduated from the United States Naval Academy with assignments on the USS Mississippi (EAG) from 1955-1956 that was home ported in Norfolk, VA, operating as part of OPDEVFORCE with primary responsibilities involving the TERRIER Air Defense System, then assigned as Radio Officer in the Communications Department, from '55-'56 was spent at Air Control Schools at NAS Glenview, IL and NAS Brunswick, GA, from '57-'59 served as CIC Officer on USS Saint Paul (CA73) operating in the Pacific, '59-'61 stationed at the U S Naval Academy as 23rd Company Officer in the Executive Department. During 1961, he resigned his commission to enter private industry. In the civilian world, it involved work at Conductron Corporation in Ann Arbor, MI, primarily with the Marketing Department/Military Hardware (R&D). He was a member of Paul C. Hoffman American Legion Post #253 in Richmond. Upon the sudden death of his father in December 1964, he returned to Richmond, bought the wholesale/retail petroleum distribution business started by his father in the early 1930's, closing down that business in 1973 to join State National Bank in Evanston, IL. He also served as a board member of the State Bank of Richmond for several years. After eight years in banking, he became the Assistant Director with the Environmental Resources area of The American Farm Bureau Association. In 1988, he was placed on medical disability (Multiple Sclerosis). He was married to Nancy Tomasek on June 11, 1955 in Detroit, MI and they operated their Christmas Tree Farm in Richmond from 1982 to 2000. He was a member of Hebron United Methodist Church Hebron, He was past president of the Richmond Rotary Club, a former Boy Scout leader. Ray is survived by his wife Nancy; a daughter, Kristin Rae Anderson of Genoa City, WI; a son, Mark (Grace) Anderson of Richmond; granddaughter, Emma (fiance Kevin) Esmond of Denver, CO; sisters-in-law, Marge Anderson of San Antonio, TX and Eloise Chromy of Loveland, CO. He was preceded by three brothers, Robert, Harold, and Ralph. Visitation will be from 9:30-11 am. Thursday January 19, 2012 at Hebron United Methodist Church 9811 Main St, Hebron with the funeral services at 11am. Rev. Paul Gerardy will officiate. Memorial contributions may be made to Season's Hospice 606 Potter Rd Des Plaines, IL 60016 or Hebron United Methodist Church or Richmond Rescue Squad.

Ray J. Anderson, 79, of Richmond passed away Monday, January 16, 2012 while in the company of family members at his residence. Ray was born in Richmond, IL on September 29, 1932, the son of the late Harry S. and Ardella E. (Bartholf) Anderson. He... View Obituary & Service Information

The family of Ray J. Anderson created this Life Tributes page to make it easy to share your memories.

Send flowers to the Anderson family.