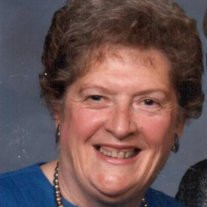 Phyllis Jean O'Holleran-Newer, formerly of Richmond and Lake Geneva died Thursday February 14, 2013 at Valley Hi Nursing Home in Hartland, IL. Phyllis was born in Genoa City, WI on September 28, 1923, the daughter of the late Charles and Alta Mae (Mountford) Yanke. She was a graduate of Genoa City High School in 1941 She married Daniel C. O'Holleran on Jan. 9, 1943 at St. Joseph Church in Richmond and he died June 11, 1976. She married Eugene Newer June 7, 1978 in Genoa City, WI and moved to Lake Geneva in 1985 and he died Oct. 25, 2010. She and Dan farmed in the Hebron area for 25 years. She loved to bake and raise a garden. She would sell her pickles to the factory and her sweet corn to stores in the area. She and Dan were instrumental in the formation of St. Joseph School in 1955. Following the fire at the farm in 1965, she and Dan moved to Richmond. She was a former member of St. Joseph Catholic Church and of the Altar and Rosary Society and the Young Couple's Club. Phyllis is survived by a son Dennis O'Holleran of Woodstock; two step daughters, Donna (Doug) George of Powers Lake, WI, Laurie (Mike) Cunningham of Richmond; a brother Bernie (Linda) Yanke of Burlington, WI. She was preceded by a daughter Mary Beth O'Holleran, a sister Velda Dahlke, four brothers Elmo, Darryl, Kenny and Gordon Yanke and by two step sons Frank and David Newer. Visitation will be from 1 to 5 p.m. Sunday February 18, 2013 at Ehorn-Adams Funeral Home 10011 Main St. Richmond. Mass of Resurrection will be at 10:30 am Monday February 19, 2013 at St. Joseph Catholic Church 10519 Main St Richmond, IL with Rev. Andrew Lewandowski officiating. Interment will be in St. Joseph Cemetery in Richmond , IL.

The family of Phyllis J. O'Holleran-Newer created this Life Tributes page to make it easy to share your memories.

Send flowers to the O'Holleran-Newer family.