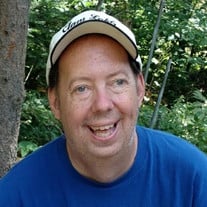 Peter Norman Rechenberg, age 53, passed away on November 19, 2017 surrounded by his loving family. Born to Norman and Irene Rechenberg on April 19, 1964, Peter grew up in Des Plaines and Libertyville, Illinois, the middle child of three sons. Peter is survived by his two brothers, David (Debbie) Rechenberg and Paul (Elizabeth) Rechenberg, and his nieces and nephews—Peter, Amy, Heidi, and Michael (Hebron, IL) and Emma, Kathryn, Thomas, and Nicholas (Chesterfield, MO). He was preceded in death by his parents, Norman and Irene, as well as his niece, Mariana Rechenberg. Peter graduated from Southern Illinois University with a degree in Journalism. He worked as a reporter for several newspapers in Illinois writing sports articles. He also earned a teaching degree in history secondary education from Southeast Missouri State University. An ardent sports enthusiast and a lifelong Chicago Cubs fan, Peter was ecstatic to see the Cubs win the World Series in 2016. He enjoyed watching the Cubs play baseball and to “Fly the W.” He loved spending time with family at the cabin in Clam Lake, Wisconsin. At a young age, Pete earned the nickname “Walleye Pete” from catching numerous large walleyes on Clam Lake. He liked playing cards and pinball, listening to ABBA, and running the family football pool. Uncle Pete had an unmistakable laugh and a warm smile that made his presence known at all family gatherings. He especially loved holidays and enjoyed making them special for his nieces and nephews. He will be missed by all, including his Aunt Judy and Uncle Michael David (Woodstock, IL), cousins John and Richard David, and his lifetime childhood friend Scott Nissan (Chicago, IL). A visitation will be held on Friday, November 24, 2017, from 5-8pm at the Ehorn-Adams Funeral Home in Richmond, Illinois. The funeral mass will be at St. Joseph Catholic Church, Richmond, Illinois, on Saturday, November 25, 2017, at 10:30am. Burial will take place in Cape Girardeau, Missouri. In lieu of flowers, memorial contributions may be made to Myotonic Dystrophy Foundation.

Peter Norman Rechenberg, age 53, passed away on November 19, 2017 surrounded by his loving family. Born to Norman and Irene Rechenberg on April 19, 1964, Peter grew up in Des Plaines and Libertyville, Illinois, the middle child of three sons.... View Obituary & Service Information

The family of Peter N. Rechenberg created this Life Tributes page to make it easy to share your memories.

Send flowers to the Rechenberg family.