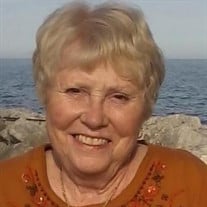 Nancy J. Anderson, age 81, of Richmond, IL, passed away Monday, July 13, 2015, at her residence, with family by her side. Nancy was born in Detroit, MI on April 10, 1934, a daughter of the late Albert and Mary (Tobias) Tomasek. She was a graduate of Redford High School, in Detroit graduating in 1952 and worked at the National Bank of Detroit during and after high school. She was married to Ensign Ray J. Anderson on June 11, 1955 in Detroit and he died Jan. 16, 2012. They lived in Norfolk, VA while Ray served on the USS Mississippi and Nancy worked for the National Bank & Trust Co. They moved to Glenview Naval Air Station, then to Naval Base in Long Beach, CA while Ray served on the USS St. Paul in the Pacific. Following that, they went to the U.S. Naval Academy in Annapolis, MD. They then moved to Ann Arbor, MI and then to Richmond where Nancy worked for the family-owned Belden Oil Co and also the U. S. Postal Service for 22 years. She was a member of the First Church of Christ, Scientist, Lake Geneva, WI. She was past president of Richmond Garden Club, served as a Girl Scout leader, member of PEO (Philanthropic Educational Organization, former Rotary Ann of the Richmond Rotary Club and an American Legion Auxiliary member. Nancy is survived by a daughter, Kristin Anderson, a son, Mark (Grace) Anderson, one granddaughter Emma Esmond, a sister, Sally (Jack) Broderick, niece Andrea Broderick and Joyce Wilson, an extra special friend for 69 years. Memorial visitation will be from 10:00 am Friday, July 17, 2015 until the service at 11:00 am Friday at the Hebron United Methodist Church, 9811 Main St., Hebron, IL, with Rev. Dr. James Wilson officiating. Inurnment will be in Richmond Cemetery in Richmond, IL. Family request donations to Richmond Fire/Rescue District 5601 Hunter Dr., Richmond, IL 60071. For information, please call 815 678-7311 or visit www.ehornadams.com

The family of Nancy J. Anderson created this Life Tributes page to make it easy to share your memories.

Send flowers to the Anderson family.