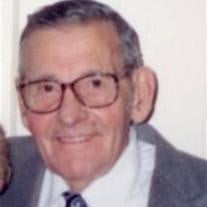 Melvin L Behrens, 87, of Hebron, IL, passed away Saturday, March 12, 2011 at the Harvard Care Center of Harvard, IL. He was born in Alden Township, Illinois on October 14, 1923, the son of the late Ludwig and Hazel (Vincent) Behrens. He attended a one room school house on Hebron Road. On February 26, 1943, he and Frances Louise Bottlemy of Hebron were married. They just celebrated their 68th anniversary. He farmed the Alden, Hebron community for several years and was a member of the McHenry County Farm Bureau. He worked for Big Foot Packing for 21 years and served as a union steward, and then 7 years at Filter-Tek in Hebron, retiring in 1988. He delivered Meals-On-Wheels for 10 years after he retired. His hobbies included woodworking, sports watching and card playing and was a member of the Merry-Go-Round Card Club. He was a fan of the Cubs, Bears, and Bulls. He was a former member of the Harvard Moose Lodge for 25 years. He was a member of Alden United Methodist Church and served as a trustee. Melvin especially enjoyed the time he spent with his family. Melvin is survived by his wife Frances; three sons James (Marsha) Behrens of Oregon, IL, Jerry (Muriel) Behrens of Cody, WY, Dennis (Cheryl Jones) Behrens of Woodstock, IL; six grandchildren, Kathy Behrens, Tige Oleksy, Sarah Lemon, Joe Behrens, Carrie Behrens and Buddy Kile; great grandson, Zach; and his sister Evelyn Pratt of Harvard. His only daughter, Barbara, passed away two years ago. He was also preceded in death by his parents; a sister, Viola Busch and two brothers, Vincent and Dave. The family wishes to thank Mercy Harvard Care Center and Hospice for the care given to Melvin. Thanks to the members of the Alden United Methodist Church for the trips to Harvard for Frances. A special thanks to Jim Nichols for everything he has done for the Behrens family and to Melvin's sister, Evelyn Pratt. Thank you, Lisa Keiser. Visitation will be held 4 to 7 pm Thursday at Ehorn-Adams Funeral Home 9625 Main Street in Hebron, IL. Funeral services will be held at 11:00 am Friday, March 18, 2011 at the Alden United Methodist Church, 16532 IL RT 173 in Alden, with Rev. Diana Otterbacher officiating. Viewing will precede the service. Burial will be in the Alden Cemetery in Alden, IL. A luncheon will be provided in the church by the UMCW of the church. www.ehornadams.com

Melvin L Behrens, 87, of Hebron, IL, passed away Saturday, March 12, 2011 at the Harvard Care Center of Harvard, IL. He was born in Alden Township, Illinois on October 14, 1923, the son of the late Ludwig and Hazel (Vincent) Behrens. He attended... View Obituary & Service Information

The family of Melvin L. Behrens created this Life Tributes page to make it easy to share your memories.

Send flowers to the Behrens family.