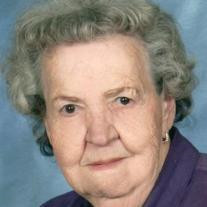 Mary Kathryn Smith-Sherry, 89, of Hebron, IL, passed away Sunday, January 20, 2013 at Centegra Hospital Medical Center, Woodstock. Mary Kathryn was born in Albion, IL on February 17, 1923, a daughter of the late Ben and Mary (Snowdal) Horton. She was a graduate of Albion High School. She was married to Richard C. Smith on November 22, 1947 in Dubuque, Iowa and he died May 24, 1979. She then married Ellsworth "Ray" Sherry on Dec 3, 1999 in Hebron and he died May 23, 2001. She was a machine operator at Filtertek in Hebron for over 15 years. She was a member of Hebron United Methodist Church in Hebron. She was a member of the Women of the Moose, loved to travel, knitting, sewing, gardening and flowers. Mary Kathryn is survived by a daughter, Connie (Ed) Gullickson, of Harvard; four sons Richard (Rebecca) Smith, of Hebron, IL; Steven Smith, of Zion, IL; Dennis (Donna) Smith, of Woodstock, IL; Jeffrey Smith, of Hebron, IL; 10 grandchildren and six great grandchildren a brother, Ben Horton, of Harvard: a sister-in-law Mary Horton and two brothers-in-law Leo Tibbitts and Charles "Sam" (Marie) Smith. She was preceded by three sons Gary, David and Gregory, two sisters Minnie Tibbitts and Helen DeMarco-Brockman and three brothers Donald Hortin, Jack Horton and Gilbert Taylor. Visitation will be from 3 to 8 pm Thursday January 24, 2013 at Ehorn-Adams Funeral Home 9625 Main St. Hebron. Funeral service will be at 11:00 AM Friday January 25, 2013 at Hebron United Methodist Church, 9811 St. Albans St. Hebron, IL. Rev. Soon Sun Lee will officiate. Interment will be in Linn-Hebron Cemetery in Hebron. In lieu of flowers, memorial contributions may be made to Hebron United Methodist Church 9811 Main St Hebron, IL 60034. For information please call 815 648-2054 or visit www.ehornadams.com.

The family of Mary Kathryn Smith-Sherry created this Life Tributes page to make it easy to share your memories.

Send flowers to the Smith-Sherry family.