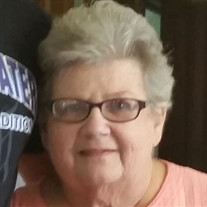 Mary E. Mars, 73, of Richmond, IL, passed away Sunday, July 31, 2016 at her residence. She was born in Sycamore, IL on December 30, 1942, a daughter of the late Arthur and Margaret (Stark) Metz. She was married to Edward J. Mars on Dec. 20, 1963, in Chicago and he passed away Nov. 17, 2000. She and her husband owned and operated Mars Auto Rebuilders for 13 years, also Mars Space Center and Favorite Pastimes Antiques. She was a member of St. Joseph Catholic Church in Richmond. She was a graduate of Richmond-Burton High School in 1961. A longtime resident of Richmond, she was involved in several organizations, such as the Richmond Lions Club, American Legion Auxiliary and taught line dancing for the community. She was employed as a secretary/bookkeeper at Richmond Township Highway Commissioner Richmond, IL, for 15 years, retiring in 2016. Mary is survived a daughter Cherie (John) Janssen, of Richmond, IL; a son James (Kathy) Mars, of Olathe, KS; four grandchildren Michael (Jessica) Mars, Christopher (Bailey) Mars, Taylor and Christian Janssen; two brothers Carl (Marilyn) Metz, of Manistique, MI and Henry (Carol) Metz, of Phillips, WI. She was preceded by her parents. Visitation will be from Noon Friday August 5, 2016 until the funeral services at 3:00 p.m. at Ehorn-Adams Funeral Home, 10011 Main St Richmond, IL, with Msgr. Martin Heinz officiating. Interment will be in St. Joseph Cemetery in Richmond, IL. Memorials may be made in her name to American Lung Assoc 55 S. Wacker, Suite 800 Chicago, IL 60601 or American Cancer Society 143 First St, Batavia, IL 60510. For information, please call 815 678-7311 or visit www.ehornadams.com.

The family of Mary E. Mars created this Life Tributes page to make it easy to share your memories.

Send flowers to the Mars family.