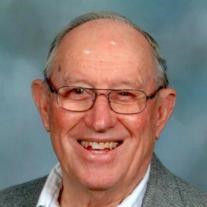 Marvin Arseneau, former resident of Richmond and McHenry Il., and currently of Horicon, Wi passed away at age 94, on Sunday, June 19, 2011 following a short illness and broken hip. He died at Hospice Home of Hope, Fond du Lac, Wi with family at his side. Marvin was born on December 26, 1916 in Beaverville, Il. to Leo and Madoza (Vade bon Coeur) Arseneau, the oldest of five sons. As a child, he only spoke French, but learned English when he went to grade school. He visited Lake Geneva with a friend in 1936 and they both wound up finding jobs on farms in the Richmond Il. area. Shortly after, he fell in love with, and married the farmer's daughter, Valeria Miller. They cherished each other for 64 years., until Valeria's passing in Jan. 2004. He was a devoted husband to Valeria while she spent the last five years of her life in a nursing home, sitting with her every day till she went to sleep. Marvin was passionate about truck driving , first being a cattle hauler and later farming along with trucking. He spent the last fourteen of his working years moving machinery for Lakeland Construction, McHenry Il. He had a great sense of direction; it served him well whether he was transporting machinery to a work site or vacationing with Valeria. Marvin was a kind and gentle man with a quiet voice and a wonderful smile. He and Valeria volunteered for Meals on Wheels for many years. They chauferred many people who weren't able to drive. He and Valeria took care of both of their mothers in their declining years. He spent a lot of time in his retirement years helping on the farms of two of his children. His family was so important to him, calling his children weekly to check on them and their families. He is survived by his children, Jack (Susie) Arseneau, Middleton, Wi., Dick (Maggie) Arseneau, Spring Grove, Il., Bill (Mary Jane) Arseneau, Niles, Il., and Mary Ann (Gary) Freund, Horicon, Wi. ; thirteen grandchildren, and 10 great-grandchildren; his brothers, Francis Arseneau, Richmond, Il. And Armel (Mary) Arseneau, Downey, Ca.; sisters-in-law Ginny Miller and Louise Miller, Richmond, Il; brother-in-law Harvey Miller, Pennsylvania. He was preceded in death by his parents and two brothers, Myron and Oneal. Visitation will be from 4 to 8 pm Friday June 24, 2011 at Ehorn Adams Funeral Home 10011 Main St Richmond, Il. Mass of Resurrection will be 11:00 am Saturday June 25, 2011 at St. Joseph's Church,10519 Main St Richmond, Il with a luncheon to follow in the church hall. There will be visitation at the funeral home from 9:00 am until the time of service. Interment will be in St. Joseph Cemetery in Richmond.

The family of Marvin M. Arseneau created this Life Tributes page to make it easy to share your memories.