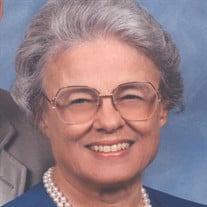 Marjorie A. May, 94, of Richmond, IL, passed away Thursday, July 25, 2019 at White Oaks in McHenry, IL. She was born in Chicago, IL on April 6, 1925, a daughter of the late William and Cora (Foley) Westmont. She was married to Frank A. "Pro" May on July 16, 1949, in Richmond and he passed away July 7, 2002. She was a graduate of Richmond High School in 1943, then graduated Beloit College in 1947. She was a member of the Community Church of Richmond. She was employed as a human resource administrative assistant at M.C.C. in Crystal Lake, for for 15 years. She was a member of Richmond American Legion Auxiliary, a member of the Richmond Garden Club, served as a Cub Scout leader, was a member of the Young at Heart, a RotaryAnn of Richmond Rotary and a member of the Order of the Eastern Star. She loved to knit, read, play cards, do puzzles and traveling with her husband. Marjorie is survived by two daughters, Laurie Roby, of McHenry, IL; Annette (Allen) Landes, of Laporte, CO; a son,Dennis (Linda) May, of Ft. Collins, CO; four grandchildren, Ben (Megan) Roby, Caitlin Roby, Kyle Roby, Sam Landes and a great granddaughter Cadence Roby. She was preceded by an infant brother Robert. Visitation will be from 4 to 8 p.m. Thursday Aug. 1, 2019 at Ehorn-Adams Funeral Home 10011 Main St, Richmond. Funeral services at will be at the funeral home 10:30 a.m. Friday, August 2, 2019 with Rev. Hope Molozaiy officiating. Interment will be in Richmond Cemetery in Richmond, IL. In lieu of flowers, memorial contributions to Community Church of Richmond 5714 Broadway Richmond, IL 60071.

The family of Marjorie A. May created this Life Tributes page to make it easy to share your memories.

Send flowers to the May family.