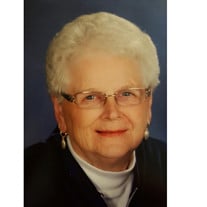 Marjorie E. Harm, 74, of Richmond (Solon Mills) IL, passed away Wednesday, September 16, 2015 at Centegra McHenry Hospital, McHenry, IL. Marjorie was born in Spring Grove, IL on November 22, 1940, a daughter of the late Lorrie and Hazel Steadman. She was married to William E. Harm on September 24,1960, at Grace Lutheran Church in Richmond, where she was an active member for many years. She was a loving wife and mother and was always involved in her children's activities from Scouts to sports. Marjorie is survived by her husband of 54 years, William; four wonderful children, Bonnie (Michael) Rabelhofer, of Richmond, three sons Scott Harm, of Twin Lakes, WI; Jeffrey (Jane) Harm, of Neenah, WI; Lance (Kimberly) Harm, of Woodstock, IL; five awesome grandchildren Jonathan, Megan, Matthew, Morgan and Tyler and one great granddaughter Vegas; two sisters, Lorraine Schultz, and Clarene Hoch, both of Florida; a brother, Ronald (Carol) Steadman, of Woodstock and a sister-in-law Sherry Steadman of Elkhorn, WI. She was preceded by a granddaughter Deidre Harm and her brother Robert Steadman. Memorial visitation will be from 10:30 to 11:00 am on Saturday October 3, 2015 at Grace Lutheran Church 6000 Broadway, Richmond, followed by service officiated by Pastor Andy Tyrrell. Memorials may be made to Grace Lutheran Church 6000 Broadway St, Richmond, IL 60071.

The family of Marjorie E. Harm created this Life Tributes page to make it easy to share your memories.

Send flowers to the Harm family.