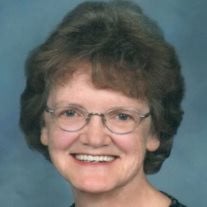 Margaret "Cele" Perry, 76, of Spring Grove, formerly Richmond, passed away Friday, February 14, 2014 peacefully, at Paradise Park Assisted Living in Fox Lake, IL. Cele was born in Peoria, Illinois on March 31, 1937, a daughter of the late John and Margaret (McLane) Powers. She was a graduate of St. Mary's High School in Woodstock, the Class of 1955. She was married to Ronald Perry on Oct. 25, 1958, in Harvard, IL and he died Nov. 22, 1982. She worked as a teller/receptionist at State Bank of Richmond (presently Associated Bank) in Richmond for 27 years, retiring in 2002. She was a member of St. Joseph Catholic Church in Richmond. She was a charter member and past officer of Richmond Lioness Club. She loved gardening, puzzles of all kinds, reading, crafts, baby-sitting grand and great grandchildren. . She lived her life joyfully, constantly giving of her time, patience, and humor through good times and hardship. She was a fierce advocate for family and friends and will be remembered - laughing - by all who knew and loved her. Cele is survived by four daughters, Linda Dubs, of Genoa City, WI; Nancy (Richard) Klay, of Springfield, IL; Cindy (Terry) O'Brien, of Spring Grove, IL; Barbara Perry, of Harvard, IL; a son,Daniel (Laurie) Perry, of Geneva, IL; 14 grandchildren and 10 great grandchildren, three sisters, Mary (Hy) Resnick, of Woodinville, WA; Rosalyn (Nate) Smith, of Surprise, AZ; Kathy (Franklin) Lowe, of Larkspur, CA; three brothers, John (Jenny) Powers, of Milton, WI; Jerome (Mary) Powers, of Bayside, WI; Patrick (Marsha) Powers, of Brownsburg, IN. She was preceded by a sister Carmella Skupien. A special thanks to all her caregivers and friends at Paradise Park. Visitation will be from 4 to 8 p.m. Wednesday Feb. 19, 2014 at Ehorn-Adams Funeral Home 10011 Main St., Richmond, IL. Mass of Resurrection will be at 10:30 am Thursday, February 20, 2014 at St. Joseph Catholic Church 10519 Main St, Richmond with Deacon Dennis Holian officiating. Inurnment will be in St. Joseph Cemetery Richmond, IL at a later date. In lieu of flowers, memorial contributions may be made to Alzheimer's Assoc 1111 S. Alpine Rd, Suite 307 Rockford, IL 61108.

The family of Margaret "Cele" Perry created this Life Tributes page to make it easy to share your memories.

Send flowers to the Perry family.