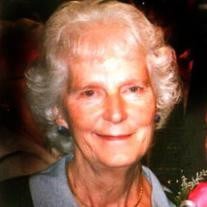 Margaret L. Norgard, 86, of Hebron died peacefully Thursday, September 29, 2011 surrounded by family members at her home. Margaret was born in Geneva Township, WI on October 25, 1924, the daughter of the late Raymond and Marjorie (Fuller) Fish. She was a graduate of Lake Geneva High School in 1942, attended Milton College for a year, graduated Milwaukee County School of Nursing in 1946 and was a registered nurse at Lakeland Hospital in Elkhorn, WI and Memorial Hospital in Woodstock for over 30 years, retiring in 1987. She was married to Ervin C. Norgard on March 15, 1947 in Lake Geneva, WI and he died June 10, 1997. She was an active member of Hebron United Methodist Church, involved in the church circles and funeral luncheons. Her life was dedicated to her family, grandchildren, great grandchildren, her nursing career and her community. She liked to dance, bake, travel and nurture her roses (Rose of Sharon). She served as an election judge for several yers. She lovingly shared her gifts and talents with everyone. Margaret is survived by three daughters, Ginger (Tom) Katzman of Whitewater, WI. Connie (Mike) Kirkpatrick of Merrill, WI, Sally (Michael) Williams of Hobart, IN, three sons Ronald Norgard and James (Janis) Norgard, both of Hebron, Curtis Norgard of Wisconsin Dells, WI; 18 grandchildren, 18 great grandchildren; eight sisters, Esther (the late Carl) Puhl, Doris (the late LaVern)Sopher and Betty (the late John) Tueting, all of Elkhorn, WI., Enid (Walt) Carper of Palm City, FL., Mary (Walter) York of Lake Geneva, WI., Gail (Ed) Knapp of Arkansas., Ruth (the late Gene) Murphy and Roxanne (the late Jack) Johnson, both of Norris City, IL; and a sister-in-law Edna Fish of Lake Geneva. She was preceded by her parents and a brother Glen Fish. Visitation will be 2 to 6 pm Sunday October 2, 2011 at Ehorn-Adams Funeral Home 9625 Main St. Hebron. Funeral services will be 11 am Monday October 3, 2011 at Hebron United Methodist Church 9811 Main St. Hebron with Rev. Paul Gerardy officiating. Interment will be in Linn-Hebron Cemetery in Hebron, IL. In lieu of flowers, memorials may be made in her name to the Hebron United Methodist Church 9811 Main St Hebron, IL 60034 or Hebron Senior Center in Hebron or Hebron Cemetery or Linn-Hebron Cemetery.

The family of Margaret L. Norgard created this Life Tributes page to make it easy to share your memories.

Send flowers to the Norgard family.