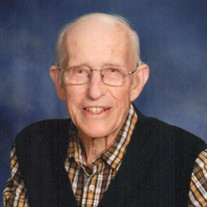 Lawrence A Johnson, 95, of Hebron, IL, passed away Thursday, October 2, 2014 at Good Shepherd Hospital, in Barrington, IL Lawrence was born in Hebron, IL on December 22, 1918, a son of the late Arthur and Alice (Lambert) Johnson. He was a graduate of Hebron High School and attended Illinois Wesleyan University, when his career plans changed when his father died of a concussion after being tossed by the Holstein bull. He began farming to support his mother and three younger brothers and continued farming throughout his life, belonging to the McHenry County Farm Bureau and Pure Milk Assoc (later AMPI). He was married to Ruth Gardner on February 1, 1941 in Solon Mills, IL and she died July 28, 2001 He attended Hebron United Methodist Church Hebron from age 10 when his family returned after four years in Boulder Creek, CA. He was active in serving on committees, as lay leader and on the administrative board, sometimes as its chairman over the years. He taught high-schoolers in Sunday School and with his wife Ruth and postmaster Arthur Latham led the Methodist Youth Fellowship, chaperoning the youth on memorable camping trips such as circling Lake Michigan and going to the Rocky Mountains in Colorado. During many of his children's school years, he was a member of the Alden-Hebron School Board, serving as president most of those years. He was instrumental in the formation process of McHenry County College. In his later years, he was able to enjoy many trips to far away places, encompassing all seven continents, including Uganda in 2010 to view high mountain gorillas. Lawrence is survived by three daughters, Julie (Ken) Spiers, of Fairbanks, Alaska; Carolyn (James) Schulz, of Barrington, IL; Marjorie (Dave) Moore, of Hebron, IL; two sons Larry (Bonnie) Johnson, of Mundelein, IL; Steven (Chela) Johnson, of Hebron, IL; 10 grandchildren and 10 great grandchildren He was preceded by three brothers, Lyle, Keith and Myron Johnson Visitation will be from 4 to 8 pm Monday October 6, 2014 at Ehorn-Adams Funeral Home 9625 Mains St. Hebron, IL Funeral service will be at 11:00 a.m. Tuesday October 7, 2014 at Hebron United Methodist Church, 9811 Main St. Hebron, IL with Rev. Dr. Jim Wilson officiating. Interment will be in Linn-Hebron Cemetery in Hebron, IL. In lieu of flowers, memorial contributions may be made to Hebron United Methodist Church 9811 Main St Hebron, IL 60034 or Adult & Child Rehab Center 708 Washington St. Woodstock, IL 60098. www.ehornadams.com.

Lawrence A Johnson, 95, of Hebron, IL, passed away Thursday, October 2, 2014 at Good Shepherd Hospital, in Barrington, IL Lawrence was born in Hebron, IL on December 22, 1918, a son of the late Arthur and Alice (Lambert) Johnson. He was... View Obituary & Service Information

The family of Lawrence A. Johnson created this Life Tributes page to make it easy to share your memories.

Send flowers to the Johnson family.