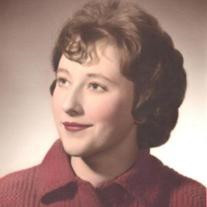 Kay M. Thomas, age 68, of Richmond, passed away Wednesday, October 17, 2012 at Centegra McHenry Hospital in McHenry, IL. Kay was born on August 13, 1944, in McHenry, a daughter of the late Frank and Shirley (Morrison) Valentine. She graduated from Richmond-Burton High School in 1962. She was married to Walter E. Thomas on November 23,1963 in Richmond and he died March 31, 2012. She worked as a transportation director for Richmond Township Senior Bus Transportation Richmond. She drove school bus for many years and worked as a clerk for Van's Supermarket in Richmond for 10 years. She served as treasurer for the Richmond Township Cemeteries. She was a member of Hebron United Methodist Church in Hebron, where she sang in the choir and was involved with the Quilting Program. Kay is survived by four sons Matt Thomas, of Meridian, Idaho, Andrew (Mary) Thomas, of Woodstock, Theodore (Becky) Thomas, of Richmond, Brent Thomas, of Richmond; seven grandchildren Madeline, Alexandra, Clayton, Brandon, Steven, Samantha and Katrina. She is also survived by a sister, Linda (Earl) Christell, of Rochelle, IL; three brothers, Barry L. (Rita) Valentine, of Marengo, IL; Thomas (Rose) Valentine, of Genoa City, WI; Donald Valentine, of Genoa City, WI. Visitation will be from 4 to 8 p.m Sunday at Ehorn-Adams Funeral Home in Richmond. Funeral services will be at 11:00 am on Monday, October 22, 2012 at Hebron United Methodist Church 9811 Main St Hebron. Rev. Soon Sun Lee will officiate. Inurnment will be in Cedarvale Cemetery in Solon Mills at a later date. In lieu of flowers, memorial contributions may be made to Richmond Fire/Rescue District 5601 Hunter Dr Richmond, IL 60071.

Kay M. Thomas, age 68, of Richmond, passed away Wednesday, October 17, 2012 at Centegra McHenry Hospital in McHenry, IL. Kay was born on August 13, 1944, in McHenry, a daughter of the late Frank and Shirley (Morrison) Valentine. She graduated... View Obituary & Service Information

The family of Kay M. Thomas created this Life Tributes page to make it easy to share your memories.

Send flowers to the Thomas family.