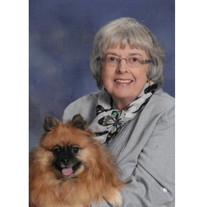 Kathryn Dickerson, age 82, of Hebron, passed away Thursday June 25, 2020 at Aurora Lakeland Medical Center in Elkhorn, WI. She was born September 23, 1937, in Elkhorn, WI, a daughter to the late Raymond and Vivian(Fountaine) Dickerson. She was a lifelong resident of Hebron, IL, and graduated from Alden Hebron High School in the class of 1955. She went to Wisconsin State at Whitewater for a semester, completed a course to become a Tour Manager. She was also a Certified Lay Speaker for the United Methodist Church. She was a member of the Hebron United Methodist Church since May 1952, and held many offices within the church structure. She has been the church secretary since 1983. She had various jobs throughout her life. She enjoyed being a Tour Manager for Mayflower Tours for over 8 years and traveled much of the countryside by bus, train and airplane. She also enjoyed traveling on her own and visited many countries in Europe, Asia, Central & South America. She traveled to all but two U.S. States. She liked to knit, sew, read, ride her bike (until she fell off and broke her arm in July 2002). Winky would often ride in the bike basket with her. She retired from Vaughan & Bushnell Mfg Co in Hebron, IL, in 2003. She enjoyed having time to spend with her dog, Winky, and being able to do her church activities. She is survived by several cousins, her church family and friends and her dog, Winky, who misses her dearly. She was preceded by four Pomeranian (Winky) dogs who were her faithful companions. Donations in her memory may be made to the Hebron United Methodist Church, P O Box 323, Hebron, IL 60034. Due to the corona virus situation at this time, a celebration of life will be at a later date.

Kathryn Dickerson, age 82, of Hebron, passed away Thursday June 25, 2020 at Aurora Lakeland Medical Center in Elkhorn, WI. She was born September 23, 1937, in Elkhorn, WI, a daughter to the late Raymond and Vivian(Fountaine) Dickerson. She was... View Obituary & Service Information

The family of Kathryn Dickerson created this Life Tributes page to make it easy to share your memories.

Send flowers to the Dickerson family.