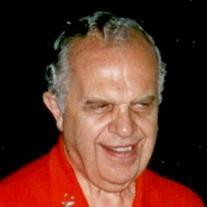 Rev. Joseph W. Kaiser, Jr, 84, of Rockford, IL., formerly of Richmond, IL, died Friday July 15, 2011 at Provena Cor Mariae Center in Rockford, IL. Rev. Kaiser was born in Rochester, NY on May 14, 1927, the son of the late Joseph W and Edna (Thrasher) Kaiser Sr. He attended the Seminary of Our Lady of Angels and Loyola University in Chicago. He was ordained a priest for the Rockford Diocese on May 28, 1955 at the Cathedral of the Immaculate Conception in Syracuse by Bishop Walter Foery. He was assigned as associate pastor at St. Joseph Catholic Church in Richmond in 1955. Other assignments as an associate pastor have included St. Patrick, St. Charles; and St. Thomas the Apostle in Crystal Lake. He has served as pastor at SS. Peter and Paul, Virgil; St. Peter, Geneva; and St. Paul, Sandwich. He spent five years as spiritual moderator of the "Search for Christian Maturity" youth group and spent 19 years as a presenting team priest for Worldwide Marriage Encounter. Fr. Kaiser was also an executive team priest for Marriage Encounter for six years. From 1960 until its closure in 1977, Father Kaiser was the Catholic chaplain at the Illinois State Training School for Girls and Boys in Geneva. During his years at the State School, Father Kaiser was elected president of the national Juvenile Correctional Chaplains Assoc. and vice-president of the American Catholic Correctional Chaplains Assoc. which is a regional organization. In addition to his pastorate, Father Kaiser served as chaplain of the Northern Illinois Medical Center in McHenry. He returned to St. Joseph parish in Richmond in 1991 as served until health dictated his retirement in 2003. One of his favorite pastimes was flying his own private aircraft. Survivors are a sister Margaret "Peg" (the late Jim) Dunham of Irvine, CA., a nephew Mike (Storm) Dunham of Columbus, Ohio, two nieces Kathy (Bob) McElligott of Kirkwood, MO and Patty (Mark) Ragland of Irvine, CA; and very close friends Ken (Char) Kania of Richmond. A sister, Mary Jane Cronin preceded him in death. Visitation will be from 4 to 8 pm Tuesday July 19, 2011 at Ehorn-Adams Funeral Home 10011 Main St. Richmond. Mass of Resurrection will be celebrated at 11:00 am Wednesday July 20, 2011 at St. Joseph Catholic Church 10519 Main St Richmond, IL. Interment will be at St. Joseph Cemetery in Richmond , IL. In lieu of flowers, memorials are requested to St. Joseph Catholic Church 10519 Main St, Richmond. www.ehornadams.com

The family of Fr. Joseph W. Kaiser Jr. created this Life Tributes page to make it easy to share your memories.

Send flowers to the Kaiser family.