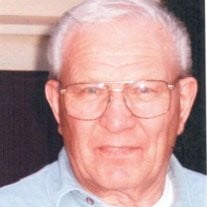 Joseph Hushka, Jr, 78, of Richmond, IL, passed away Thursday, October 24, 2013 at Centegra McHenry Hospital, McHenry. Joseph was born in Dickinson, North Dakota on February 5, 1935, a son of the late Joseph and Katherine (Stier) Hushka, Sr. He was married to Eleanor Moravec on May 29, 1953, in River Grove, IL. He worked as a mason/bricklayer for over 42 years, most recently with J.A.C. Masonry of Lake Villa retiring in 2001. He was a member of Grace Lutheran Church in Richmond. He was a member of the Loyal Order of Moose-McHenry Lodge 691. He was an avid bowler, bowling on several league teams. He served in the National Guard for eleven years. Joseph is survived by his wife Ellie; two daughters, Bonnie Frohling, of McHenry, IL; Susan (Ben) Jacobs, of Richmond, IL; four grandchildren Jennifer (Matt) Wittum, Renee Woods, Holly (Bob) Walczak, Bradley Jacobs; three great grandchildren Sadie Stevens, Braden and Ben Wittum and a sister, Barbara (Melvin) Kaufman, of Pierre, SD. He was preceded by a sister Rose and three brothers Tony, Ben and Tom. Visitation will be from 4 to 8 pm Monday October 28, 2013 at Ehorn-Adams Funeral Home 10011 Main St, Richmond. Funeral service will be at 11:30 am Tuesday October 29, 2013 at Grace Lutheran Church, 6000 Broadway Richmond, IL, with Pastor Andy Tyrrell officiating. Inurnment will be in Richmond Cemetery at a later date. In lieu of flowers, memorial contributions may be made to Grace Lutheran Church 6000 Broadway Richmond, IL 60071. For information, please call 815 678-7311 or visit www.ehornadams.com.

The family of Joseph M. Hushka Jr created this Life Tributes page to make it easy to share your memories.

Send flowers to the Hushka family.