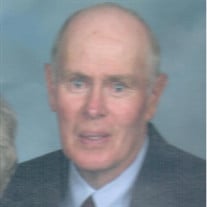 Jim J. Lalor, age 85, of Woodstock, IL, formerly of Hebron, passed away Wednesday, January 29, 2020 while in the company of family members, at his residence. He was born in Hebron, IL on November 19, 1934, a son of the late Marguerite (Sheehan) and Walter Lalor. He was a graduate of St. Mary's High School in Woodstock in 1952. He served as a Sp/4 in the US Army from May 1957 to May 1959. He was married to Patricia Harris on May 21, 1966, at St. Patrick's in Hartland, IL and she passed away June 14, 2007. He was a member of St. Mary's Catholic Church in Woodstock, IL and a former member of St. Joseph's Catholic Church in Richmond. In his early years, he worked on his father's farm until he began running his own dairy farm from 1965 until retirement in 1997. Jim was an avid supporter of both the Green Bay Packers and the Chicago Cubs. In later years, he supported the teams where his sons coached, particularly Marian Central Catholic Hurricanes in Woodstock, IL, the Stillman Valley Cardinals in Stillman Valley, IL and the Ripon Tigers in Ripon, WI. Jim also followed closely on the world map his daughter's overseas postings and he particularly enjoyed long cold winter day talks with another son now living on the family farm. Following his wife's passing, Jim volunteered in the transport office at Centegra Hospital in Woodstock from 2008-2019. He greatly enjoyed working with the many teams of people he encountered there. James is survived by his five children; Laura, Joe (Jennifer), Mike (Heather), Chris (Sarah), Tim (Colleen) and his nine grandchildren. He is also survived by a sister, Mary Hart and a brother, Tom (Ann) Lalor. Visitation will be from 12 to 4 p.m. Sunday February 2, 2020 at Ehorn-Adams Funeral Home 10011 Main St, Richmond, IL. Mass of Resurrection at St. Mary's Catholic Church, Woodstock, IL, at 10:00 a.m. on Tuesday, February 4, 2020 with Fr. Paul Lipinski officiating. Interment will be in St. Joseph Cemetery in Richmond, IL with military honors. In lieu of flowers, memorial contributions to St. Vincent dePaul Society or to the Lalor family for establishment of a private scholarship to help young students in need.. For information please call 815 678-7311.

Jim J. Lalor, age 85, of Woodstock, IL, formerly of Hebron, passed away Wednesday, January 29, 2020 while in the company of family members, at his residence. He was born in Hebron, IL on November 19, 1934, a son of the late Marguerite (Sheehan)... View Obituary & Service Information

The family of Jim J. Lalor created this Life Tributes page to make it easy to share your memories.

Send flowers to the Lalor family.