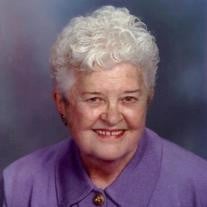 Jane E. Wilson, 88, of Richmond, IL passed away on Thursday, February 16, 2012, at Centegra Hospital McHenry, surrounded by her family. She was born July 11, 1923, in Chicago, to Bernard and Gertrude (Slovey) Fitzgerald. Jane graduated from Visitation Grade School, Mercy High School and Fox Secretarial College in Chicago. She was employed by the Quartermaster Corp., General Accounting Office of the U.S. Government from 1940 to 1948. Jane was introduced to her husband, John C. Wilson, of Richmond, IL, at Wrasse’s Tavern in Genoa City, WI, by her mother, Gertrude. On April 23, 1949, Jane married John at St. Sabina’s Catholic Church in Chicago, IL. Following their marriage, Jane quickly transitioned from being a “city” girl to a “country” gal. She learned how to drive the little red Studebaker truck, helped with farm chores, planted gardens, raised a family and harvested the fruits of her labor. Jane was a member of St. Joseph’s Catholic Church for the past 63 years. Her faith, her family and her friends were most important to her. Over the years, Jane served in many roles including past President and Secretary of the Altar & Rosary Society, President of the Home & School Organization of St. Joseph’s School, Rural Life Representative of the Diocesan Council of Catholic Women, Hospitality Greeter and Calling and Caring Ministry correspondent. Jane was also honored as the 2008 Woman of Inspiration by the St. Joseph Parish community. She cherished the many friendships she made through all the organizations she belonged to and supported. In addition to those already mentioned, Jane was a member of the Young at Heart Seniors’ Club, the Daughters of Isabella, Elizabeth Ann Seton Circle, the Mother’s Club of Richmond High School, and the Lotus Country Women’s Club of Spring Grove, IL. She was also a 4-H Club Leader and Brownie Troop Leader, Secretary of the Richmond Homemaker’s Evening Club and Secretary of the Village Garden Club of Genoa City, WI. Jane also served as an election judge in Richmond, IL for many years. Jane loved people and enjoyed the opportunity to welcome everyone into her life and home. While working as a waitress at Orsolini’s restaurant, Jane frequently invited customers home for a meal. Holiday celebrations were filled with guests Jane had included to join family members and friends. Everyone was welcome and there was always room for one more person. In addition to her outgoing personality and welcoming spirit, her greatest legacy was her faith. Much of Jane’s daily life was devoted to prayer. She tried to live God’s will and she prayed daily for family, friends and other’s intentions. Jane was a “prayer warrior” who fully lived her Catholic faith. Jane started the Prayer Ministry at St. Joseph’s Church and continued the ministry for several years. Jane enjoyed a variety of activities. She loved writing notes to those who were ill or those who needed a little sunshine in their day. She was an avid knitter and a regular participant in community senior citizen activities. She was a “card shark” who played pinochle and hosted weekly card games at her home. Jane was also a die-hard Cubs fan for more than 65 years. On her 80th birthday, she was invited to the Cubs dugout where she met several team members and the general manager. Jane loved life and was particularly drawn to puppies and babies. She never missed an opportunity to reach out to a newborn and share her spirit. She will also be missed by her feathered bird friends who she lovingly cared for. Jane regularly watched the sitcom “Seinfeld” and laughed often with the characters and at storylines from the show. The lives of her family and friends have been blessed by her love, faith and friendship and Jane will be greatly missed by all. She is survived by her daughters, Colette Buckles, Nancy Wilson (Maurice Martin) and Mary Jane Wilson; grandchildren Clifton and Anastasia Buckles; dear friend and caregiver Maria Kelly; and several nieces and nephews including Goddaughter Geraldine Lenihan and favorite nephew Red Rose. She was preceded in death by her parents; her loving husband, John on June 1, 1995; and her sister, Mary Ann Rose. The visitation will be from 2 to 6 PM on Sunday, February 19, at Ehorn Adams Funeral Home, 10011 Main Street, Richmond, IL. A Mass of Resurrection will be celebrated at 10:30 AM on Monday, February 20, at St. Joseph Catholic Church, 10519 Main Street, Richmond, IL. Interment will be in Mound Prairie Cemetery in Twin Lakes, WI. In lieu of flowers, memorials made in Jane’s name to either of the following organizations would be greatly appreciated: St. Joseph Church Altar & Rosary Society or Richmond Fire/Rescue Squad, 5601 Hunter Drive, Richmond, IL 60071.

Jane E. Wilson, 88, of Richmond, IL passed away on Thursday, February 16, 2012, at Centegra Hospital McHenry, surrounded by her family. She was born July 11, 1923, in Chicago, to Bernard and Gertrude (Slovey) Fitzgerald. Jane graduated from... View Obituary & Service Information

The family of Jane E. Wilson created this Life Tributes page to make it easy to share your memories.

Send flowers to the Wilson family.