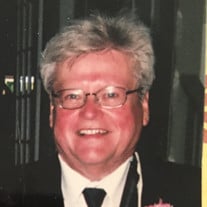 Richmond, IL James J. Jeffers, Sr. James J. Jeffers, Sr., 64, of Genoa City, WI, formerly McHenry, IL, passed away Monday, October 31, 2016 at his home surrounded by his family. He was born in Chicago, IL on May 1, 1952, a son of the late Joseph and Barbara (Sullivan) Jeffers. He was married to Deborah Coutts on October 18, 1975, in Arlington Heights, IL. A graduate of St. Viator High School, and the University of Illinois, he was in graphic arts and printing for over 35 years, retiring in 2012. He was a member of McHenry Chamber of Commerce. A lifelong Chicago Bears fan, he held season tickets for over 40 years. James is survived by his wife Deborah, a daughter Jennifer (Todd) Mathis, of McHenry, IL; a son James (Becky) Jeffers Jr, of Muskego, WI; two granddaughters Aubrey and Amelia Jeffers; two sisters Jayne (Paul) Ponsot, of Barrington, IL; Patti (Richard) Miles, of Palatine, IL; and a brother Gary Jeffers, of Fox Lake, IL. He was preceded by his parents Joseph and Barbara Jeffers. Visitation will be from 1:00 p.m. until the funeral service at 4:00 p.m. Thursday November 3, 2016 at Ehorn-Adams Funeral Home 10011 Main St. Richmond, IL. Chaplain Nancy Hodge will officiate. For information, please call 815 678-7311 or visit www.ehornadams.com.

The family of James J. Jeffers Sr. created this Life Tributes page to make it easy to share your memories.

Send flowers to the Jeffers family.