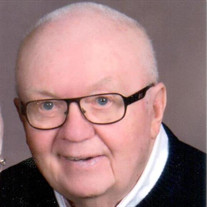 Howard (Sonny) Katzenberg, 87, of Richmond IL, passed away at Northwestern McHenry Hospital on Sunday, Dec. 15, 2019. He was born in Richmond, IL on April 16, 1932, the son of Douglas and Jenny (Christensen) Katzenberg. He graduated from Richmond-Burton High School in 1950 and from Beloit College in 1956, after spending 1952 to 1954 serving in the US Army. He was a member of the Paul C Hoffman Legion Post #253 in Richmond, and was the guiding force behind the placing of the veteran's monuments in the Gazebo Park. He was a member of Grace Lutheran Church. After graduating from college, he taught, and coached basketball and baseball at Jefferson High School in Jefferson, Wl for four years. When returning to Richmond in 1960, he opened the H.F. Katzenberg Real Estate Agency which he ran for over 50 years. His passion in life was sports. He was a big Cubs, Bears and Bulls fan. Over the years he held numerous coaching positions. He was very proud of his induction into the Richmond-Burton High School Athletic Hall of Fame, and his affiliation, as an assistant coach, with the 1992 Richmond-Burton High School State Championship Football Team. He was thrilled to be able to watch this year's football team win another state title. The line-up, for Miller's Corner's Baseball Team in heaven, is now complete. The last surviving member has arrived. Sonny was preceded in death by his parents and a sister-in-law, Dr. Susan Johonnott. He is survived by Ann Katzenberg of Richmond, his son Jeff Katzenberg of Genoa City, Wl, his daughter Jane (Tim) Eaton of Wilmette, IL and grandchildren, Brian, Brent and Amanda. Services will be held Thursday, Dec. 19, 2019 at Grace Lutheran Church in Richmond. The visitation will be from 9:00 AM until the service at 12:00 noon, Pastor Andy Tyrrell officiating. Inurnment will be in Richmond Cemetery. Lunch will follow in the church Fellowship Hall. In lieu of flowers, memorials in his name may be made to Grace Lutheran Church, Box 425, Richmond, IL 60071 ; The Richmond Fire and Rescue, 5601 Hunter Dr., Richmond, IL 60071; or Vet's Roll, 1777 Gardner St., South Beloit, IL 61080.

Howard (Sonny) Katzenberg, 87, of Richmond IL, passed away at Northwestern McHenry Hospital on Sunday, Dec. 15, 2019. He was born in Richmond, IL on April 16, 1932, the son of Douglas and Jenny (Christensen) Katzenberg. He graduated from Richmond-Burton... View Obituary & Service Information

The family of Howard "Sonny" Katzenberg created this Life Tributes page to make it easy to share your memories.

Howard (Sonny) Katzenberg, 87, of Richmond IL, passed away at...

Send flowers to the Katzenberg family.