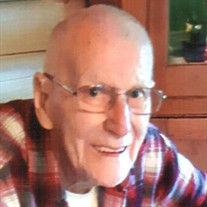 Harry A Mesmer, Jr., age 89, of Clinton, WI, passed away April 15, 2020 while in the company of family members, at his home. He was born in Salem, WI on July 25, 1930, a son of the late Harry and Rose (Krahn) Mesmer, Sr. He was a graduate of Wilmot High School in 1949. He was married to Molly Motroni (Canty) on May 19,1984, in Richmond, IL and they would be celebrating 36 years this year. He was a mechanic at Great Lakes Naval Base from 1967 to 1991. He was also manager of KOA Kampground in Payron, AZ from 1991 to 1997. He served as Captain of the Salem Fire Station during the 1960's, coach of the Lakeland Little League in Salem, WI from 1962 to 1972. He enjoyed cars, motorcycles, woodworking, playing cribbage and cards, traveling and also nature. Harry is survived by his wife Molly; three daughters, Mary Young, Lisa Lilly, Marlene Brice; five sons Dean, Thomas, and Gerad Mesmer, Robert and Philip Canty; 16 grandchildren and 12 great grandchildren. He was preceded by his parents, a son Stanley Mesmer, a grandson Justin Brice, a sister Fran and her husband Bud Stoxen and a son-in-law Ronald Brice. Due to circumstances right now, no services are planned at this time.

The family of Harry A. Mesmer Jr. created this Life Tributes page to make it easy to share your memories.

Send flowers to the Mesmer family.