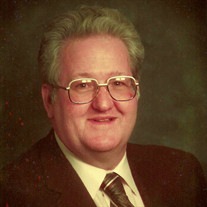 Harlan S. Fleece, Sr., 82, of Viola, AR, formerly Mundelein, passed away Friday, May 30, 2014 at Mercy Hospital, Springfield, MO. Harlan was born in Lebanon, PA on October 8, 1931, a son of the late John and Ruth (Marks) Fleece. He married Joan Garrey April 19, 1952 in Lake Forest, IL and she died Sept. 20, 1970. Then he married Nancy Moore on May 16, 1981 in Lake Zurich and she died February 19, 2013. He served his country honorably in the U.S. Army from 1948 to 1951. He then began a career as an artillery repairman working at Ft. Sheridan and traveled the country with his expertise. He retired in 1989 after 40 years of military and civil service. Harlan is survived by a daughter, Kimberly Schultz, of Denver, CO; three sons Harlan Fleece, Jr., of Gurnee, IL; Timothy (Cindy) Fleece, of Round Lake Beach, IL; Kevin (Debbie) Fleece, of Seven Lakes, NC. two stepchildren of his second wife; John Moore and Mary (Anup) Moore-Kumar, both of Ashland, Oregon; five grandchildren and nine great-grandchildren. Harlan will be greatly missed by his family and friends for his gentle soul, acts of kindness, his joyful and light hearted outlook on life, as a great friend, a loving father, grandfather and great grandfather. We are grateful and blessed to have had him with us for 82 years. Visitation will be from 5 to 8 p.m. Friday June 6, 2014 at Ehorn-Adams Funeral Home 10011 Main St., Richmond, IL. The funeral service will be at 11:00 a.m. Saturday June 7, 2014 at the funeral home. Rev. Terry Dufur will officiate. Memorials in his name to: American Lung Association 55 S Wacker Dr, Suite 800, Chicago, IL 60601. Interment with military honor will be at Cedarvale Cemetery in Solon Mills, IL. For information please call 815 678-7311 or visit www.ehornadams.com.

The family of Harlan S. Fleece Sr. created this Life Tributes page to make it easy to share your memories.

Send flowers to the Fleece family.