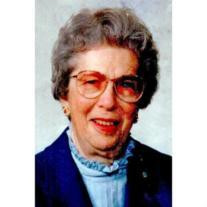 Richmond, IL Grace G. Prickett-Cubbidge Grace G. Prickett-Cubbidge, 94, of Richmond, formerly of Woodstock and Chicago died Tuesday, January 11, 2011 at the Fountains of Crystal Lake in Crystal Lake, IL. Grace was born in Chicago, IL on December 7, 1916, the daughter of the late John and Mary (Stark) Roskam. She was married to William A. Prickett on Juy 9, 1969 in DesPlaines and he died June 11, 1984, then married James Cubbidge Dec. 2, 1985 in Richmond and he died Oct. 23, 2003. She was the office manager at Hub Ford in Chicago for many years, retiring in the late 1970's. She was a member of Community Church of Richmond. She was a member of the Audubon Society and loved bird watching and all kinds of animals. Grace is survived by a nephew James (Karen) Prickett of Richmond, a niece Joyce Parks of Hoffman Estates, great nieces and nephews Ronda Parks of Elgin, Michael Parks of Hoffman Estates, James W. (Rachel) Prickett and Julie (Joseph) Amore, both of Richmond and great great niece and nephew Katlyn and Troy Amore and a sister-in-law Ruby Roskam. She was preceded by a brother George Roskam. Visitation will be from 2 pm until the memorial service at 4 pm. Saturday Jan. 22, 2011 at Ehorn-Adams Funeral Home 10011 Main St. Richmond with Rev. Hope Molozaiy officiating. Inurnment will be in Oakridge Cemetery in Hillside, IL. In lieu of flowers, memorials may be made to the Community Church of Richmond 5714 Broadway Richmond, IL 60071 or Juvenile Diabetes Research Foundation 11 S. LaSalle St., Chicago 60603-1344. www.ehornadams.com

The family of Grace G. Prickett-Cubbidge created this Life Tributes page to make it easy to share your memories.

Send flowers to the Prickett-Cubbidge family.