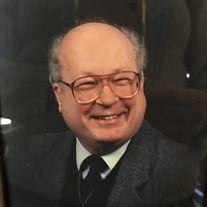 Rev. Glenn F. Mensing, 85, of Sterling, IL, formerly Richmond, passed away Wednesday, November 22, in Sterling, IL. He was born in Glen Ellyn, IL on November 13, 1932, a son of the late Clifford and Frances (Seaman) Mensing. He was married to Joan Berger Aug 30, 1952 in Ft Devens Ayer, MA and she passed away June 18, 1994. He later married Sharon Wheeler on Sept 30, 1995, in Richmond, IL. He served in the U.S. Army as a CPL in security from May 1952 to May 1955. He graduated from seminary school in 1965 and became minister at Community Church of Richmond in 1972 until 1992, then was anointed Paster Emeritus. Glenn also served as the Illinois UCC Association Minister from 1996 to 1997. He was chaplain and a volunteer of the Carpentersville Fire Dept. He was a founding member of the Professional Assoc of Clergy Credit Union. Glenn had conducted countless marriages, baptisms, and hand an impact on so many lives. He served as Past president of Richmond Rotary Club, was an avid bowler and bridge player and enjoyed his grandchildren and great grandchildren. Rev. Glenn is survived by his wife Sharon; three daughters, Debbie (Rodney) Schraw, of Huddleston, VA; Vicki Elverman, of Kenosha, WI; Barbara (Craig) Halvorsen, of Woodstock, IL; son David Mensing, of Wilmot, WI; step-son Joey (Tina) Cogdell, of Prophetstown, IL; 14 grandchildren, 20 great grandchildren and a great great grandson plus a brother, John (Connie) Mensing, of Raleigh, NC. He was preceded by a sister Donna Halvorsen and two brothers Clifford and Robert Mensing. Memorial visitation will be from 10:00 a.m. Saturday May 12, 2018 until the memorial service at 11:00 a.m. at the Community Church of Richmond. Rev. Hope Molozaiy will officiate. Due to space considerations, anticipated attendance, and for information, please call 815 678-7311 or visit www.ehornadams.com. Inurnment will be in Richmond Cemetery in Richmond with military honors.

Rev. Glenn F. Mensing, 85, of Sterling, IL, formerly Richmond, passed away Wednesday, November 22, in Sterling, IL. He was born in Glen Ellyn, IL on November 13, 1932, a son of the late Clifford and Frances (Seaman) Mensing. He was married... View Obituary & Service Information

The family of Rev. Glenn F. Mensing created this Life Tributes page to make it easy to share your memories.

Send flowers to the Mensing family.