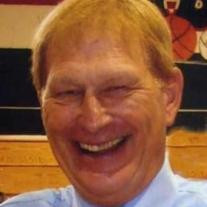 Toulon – Glenn W. “Butch” Buchert, 69, of Toulon, passed away Wednesday, June 1, 2011, at 9:17 PM, in his home surrounded by his wife and family. He was born in Woodstock, IL on November 15, 1941, to Glen and Ruth (Ruenz) Buchert. He married his high school sweetheart, Nancy Hall, on June 26, 1965, at Grace Lutheran Church in Richmond, IL. She survives. In addition to his wife, he is survived by his brother, Paul (Fatima) Buchert, of Knoxville, TN; and numerous nieces and nephews. He was preceded in death by his parents. Butch received his Bachelor of Science Degree in Secondary Education from Carthage College, Carthage, IL. He began teaching at Toulon High School in the fall of 1964 with a goal of 50 years in education. He taught all science classes. He received both a Master of Science in Education and a Master of Science in Guidance Counseling, from Bradley University while still teaching at Toulon High School (currently Stark County High School). In 1991, he moved from classroom teaching to become the guidance counselor. He was advisor to several classes, National Honor Society and Stark County Student Council. His stroke and cancer forced him to retire after nearly 47 years in education. Teaching was his love. Butch worked summers at the canning company in Princeville, Illinois for 40+ years. He was known as “Mr. B.” to all of his students and most of the community of Toulon and Stark County Schools. He was Student Council Advisor for many years, always encouraging his students to get involved in Student Council which would help make them a better person and better leaders in school and life. Butch suffered a devastating brain stem stroke in November 2009. He and Nancy spent months in rehabilitation between Methodist Hospital, Peoria Specialty Hospital and RIC in Chicago fighting hard to get back to school. In October 2010, he had surgery for pancreatic cancer, after which he faced many hurdles that he was not able to overcome. He was a strong man who never gave up and fought this courageous battle till the end. He was loved by all, as evidenced by the outpouring of support from his students and community following his stroke and during his rehabilitation and until his death. Mr. B. and Nancy enjoyed attending various school functions at SCHS in support of all of their ‘kids’. He loved the outdoors, whether it was working in the yard, riding bikes or going for a walk with Nancy, his horses and dogs. Attending graduation parties and weddings of his former students meant so much to him. His love for his students was very overwhelming that only a man of Butch’s character would know the true meaning of teaching/counseling. A visitation will be held on Sunday, June 5 from 1-5 PM at Stark County High School. A memorial service will follow. A visitation will be held on Monday, June 6 from 1-2 PM at Ehorn-Adams Funeral Home in Richmond, IL, followed by a graveside service in Richmond Cemetery. Toulon Funeral Home and Ehorn-Adams are in charge of arrangements. In lieu of flowers, please consider a memorial contribution to Stark County Education Foundation toward a scholarship in Mr. B.’s name. Private condolences may be sent to the family via www.toulonfh.com.

The family of Glenn "Butch" Buchert created this Life Tributes page to make it easy to share your memories.

Send flowers to the Buchert family.