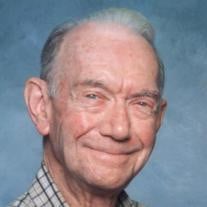 Fred L. Young, age 85 of Sturtevant, WI, formerly of Richmond, passed away Wednesday July 25, 2012 while in the company of family members at Wheaton Franciscan Health Center in Racine, WI. Fred was born in St. Paul, NE on January 26, 1927, a son of the late Henry and Lillian (Huntworth) Young. He was married to Gloria J. Fay on June 17, 1949 in Elgin, IL and she died Jan. 3, 1984. He then married Shirley Messemore in 1991 and she died 1996. He was a self employed poultry/agricultural farmer in the Richmond area for over 20 years. Following retirement, he worked as a custodian at Hearthstone Village in Woodstock for 8 years. He served in the U.S. Navy as a Seaman 1st Class in WW II, aboard the USS Oakland. He was a former member of VFW in Lake Villa. Fred is survived by four daughters; Delma Gockel, of Durango, CO, Sherry (Gary "Bear") Spicer, of Sturgis, SD, Stacey (Dale) Uselton, of Bloomington, IL, Kristi (Michael) Sparks, of Sturtevant, WI; seven grandchildren, Marc, Matt, Corie, Steven, Melissa, Jessica and Timothy; four great granddaughters; two brothers, Donald (the late Muerita) Young, of DeKalb, IL and Jack (Phyllis) Young, of West Chicago, IL. A gathering of relatives and friends will be from 2 pm Saturday July 28, 2012 until the service at 4 pm at Ehorn-Adams Funeral Home, 10011 Main St. Richmond, IL. Military honors will follow. Inurnment will be in Lakewood Memorial Park Cemetery in Elgin, IL. Memorials may be made to Wheaton Franciscan Health Center 3801 Spring St. Racine, WI 53405.

The family of Fred L. Young created this Life Tributes page to make it easy to share your memories.

Send flowers to the Young family.