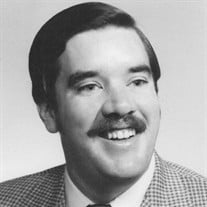 Frederick S. Carroll, 67, of Richmond, IL, passed away Saturday, December 6, 2014 at Centegra Hospital, McHenry, IL. He was born in Baltimore, MD on January 3, 1947, a son of the late Miles and Mary Louise (Steil) Carroll. He was a graduate of St. Paul's School in Baltimore in 1965, earned a Bachelors from American University in Washington, DC, and a Masters from American Graduate School of International Management in AZ. He was married to Nancy Neucks on Oct. 18, 1982 in Evansville, IN. After working as a salesman for Stryker Equipment, he and Nancy formed Merit Medical in McHenry, which they operated for 20 years. Fred was a member and past president of Richmond-Spring Grove Rotary Club. He enjoyed antique cars and had a keen interest in books, especially about history. He also served as Republican precinct captain for several years. He served in the U.S. Army as a SP 4 during the Vietnam War, earning the Combat Infantry Badge and was awarded multiple Purple Heats. Fred is survived by his wife Nancy; a brother, Thomas (Deb) Carroll, nieces Erin Sutton and Amanda McClure, grand nieces Hadlee Sutton and Piper and Quinn McClure, all of Baltimore, MD; sister-in-law Jayne (James) Thorne, nieces Maureen (Aaron) Kauffman and Meredith (Michael) Fleming, and several grand nieces and nephews, all of Indianapolis, IN Memorial visitation will be from 9 am Thursday December 11, 2014 until the service at 10 am. at Ehorn-Adams Funeral Home 10011 Main St Richmond, IL. Inurnment will be in Arlington National Cemetery in Arlington, VA with military honors at a later date. In lieu of flowers, memorial contributions may be made to Disabled American Veterans 2122 W. Taylor St., Suite 104 Chicago, IL 60612. .

Frederick S. Carroll, 67, of Richmond, IL, passed away Saturday, December 6, 2014 at Centegra Hospital, McHenry, IL. He was born in Baltimore, MD on January 3, 1947, a son of the late Miles and Mary Louise (Steil) Carroll. He was a graduate... View Obituary & Service Information

The family of Fred S. Carroll created this Life Tributes page to make it easy to share your memories.

Send flowers to the Carroll family.