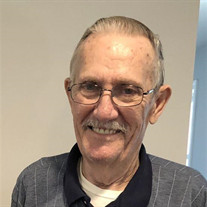 Frankie Cherry, age 76 of Richmond, passed away Sat. Nov. 10, 2018 at his home surrounded by family. After surviving a heart transplant in 2006, he found peace after a diagnosis of cancer.  He was born Sept. 3, 1942 in Red Boiling Springs, TN, a son of Vernie and Erma (Rich) Cherry. He was married to Susan Kelly on Oct. 31, 1987 in Richmond.  He owned and operated The Depot Restaurant in Richmond for 43 years. He served as a sergeant in the U.S. Army from 1966 to 1968 and was a member of Paul C. Hoffman American Legion Post #253 in Richmond. He was a member of the Church of Christ in Elkhorn. He was a jack of all trades, professional putzer, and had a great gift of gab.  Frankie truly lived life to the fullest through simple pleasures; spending time with friends and family, snacking, and refereeing between his two daughters battling for title of ‘his favorite’. Frankie is survived by his wife Sue, two daughters Alison (Matthew) Wild of Spring Grove, IL, Brandi (Kyle) Rush of Antioch, IL; three grandchildren Dylan Cherry, Adalyn and EllyAnn Wild , three sisters Linda (Ron) Koch and Suzanne (Larry) Wayman both of Greenwood, IN, Kathy (Danny) Halliburton of Red Boiling Springs TN; two brothers Charlie (Shirley) Cherry of Greenwood, IN and Jackie Cherry of Red Boiling Springs, TN; his three bonus girls Christy Kreush, Amanda Kelly, and Katie Busse and many nieces and nephews and their families.  He was preceded by a sister Janice Cherry and two brothers Johnnie and Robert Cherry.  A Celebration of Life will begin at 11:30 a.m. including military honors and  will continue with visitation and fellowship, Wed, Nov. 14, 2018 at the Rusty Nail restaurant, 4520 Ringwood Rd in Ringwood, IL., followed by a luncheon at 1:30 p.m. Rev. Jim Coehoorn will officiate.  Inurnment will be in the family cemetery in Red Boiling Springs at a later date. For info, call 815 678-7311.

Frankie Cherry, age 76 of Richmond, passed away Sat. Nov. 10, 2018 at his home surrounded by family. After surviving a heart transplant in 2006, he found peace after a diagnosis of cancer.  He was born Sept. 3, 1942 in Red Boiling Springs,... View Obituary & Service Information

The family of Frankie Cherry created this Life Tributes page to make it easy to share your memories.

Send flowers to the Cherry family.