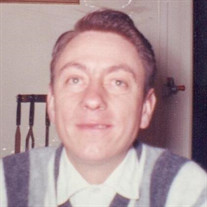 Ernest W. Kautz, 77, of Richmond, IL, passed away Wednesday, November 26, 2014 at Centegra McHenry Hospital, McHenry, IL Ernest was born in Genoa City, WI on March 28, 1937, a son of the late Ernest and Mary (Stocker) Kautz. He was married to Patricia Miller on Oct. 16, 1961 at Christ the King Church in Wonder Lake, IL. He worked as a die caster at Woodstock Die Casting Woodstock, IL., for 17 years. He also worked for McHenry Sand and Gravel for over 10 years and Olsen Electrics for 10 years. He was a member of the Jersey Cattle Club ans bowled on several bowling leagues. Ernie is survived by his wife Pat, a son,Tony Kautz, of Richmond, two grandchildren Kayla Kautz and Anthony Kautz. He was preceded by two sisters Mary Ellen Gifford and Marcella Kautz. Visitation will be from 4 to 8 p.m. Monday December 1, 2014 at Ehorn-Adams Funeral Home. Funeral service will be at 11:00 a.m. Tuesday December 2, 2014 at Ehorn-Adams Funeral Home, Richmond, IL. Msgr. Martin Heinz will officiate. Interment will be in Hillside Cemetery in Genoa City, WI. In lieu of flowers, memorial contributions may be made to Hooved Animal Humane Society, 10804 McConnell Rd, Woodstock, IL 60098.

The family of Ernest W. Kautz created this Life Tributes page to make it easy to share your memories.

Send flowers to the Kautz family.