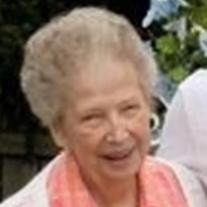 Elizabeth J. "Betty" Hammond, 74, of Hebron passed away Saturday, February 25, 2012 at Hospice of Northeastern Illinois in Woodstock surrounded by her family. Elizabeth was born in Joliet, IL on January 22, 1938, the daughter of the late Bernard... View Obituary & Service Information

The family of Elizabeth "Betty" Hammond created this Life Tributes page to make it easy to share your memories.

Send flowers to the Hammond family.