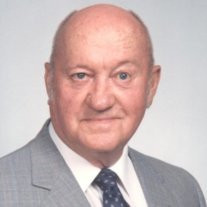 Edward C. Waspi, 94, of Twin Lakes, WI, formerly of Richmond, IL, passed away Wednesday, November 13, 2013 at his residence. Edward was born in Spring Grove, IL on February 22, 1919, a son of the late John and Lydia (Andrews) Waspi. He was a graduate of Richmond High School-Class of 1937 and served twice on the Richmond-Burton Alumni Committee. He enjoyed reading, fishing, camping, gardening, yard work, playing cards, traveling and spending time with family and friends. He was married to Betty J. Buchert on May 27, 1944, in Richmond. He originally worked at Kruse Hardware in Richmond, then was employed as an operating engineer for E. H. Melhan Construction for 33 years retiring in 1984 and was a member of Operating Engineers Local #150. He was a member of Community Church of Richmond and served on the church board of trustees. He was a member and Past Master of Richmond AF & AM Lodge #143, Past Worthy Patron of O.E.S. in 1957, served on Richmond Grade School Board, served on Richmond Village Board of Trustees, a member of Woodstock Moose and McHenry County Historical Society. He was a pilot with the 466th Bomb Group, 8th Air Force in the European Theater. He was a 1st Lt, during WW II, serving from 1942 to 1945. He was a member of Paul C. Hoffman American Legion Post # 253. Edward is survived by his wife Betty, two daughters, Barbara (Wayne) Japp, of Woodstock, IL; Dianna "DE" (Mike) Nieciecki, of Twin Lakes, WI; a son Charles "Bud" (Donna Lakomiak) Waspi, of Twin Lakes, WI; three grandchildren Edward Waspi, Brian (Kristin) Waspi, Pepper (Todd) Reicher, one great granddaughter Jayne Ann Reicher and a brother Glenn Waspi of Crystal Lake, IL. He was preceded by two sisters Edith McDonald, Marguerite Pierce-Moore and by four brothers John, Fred, Paul and George and sisters-in-law Clarice Waspi, Marcella Waspi and Iva Thompson. Visitation will be from 3 to 8 pm Friday at Ehorn-Adams Funeral Home 10011 Main St Richmond. Funeral service will be 11:00 am Saturday November 16, 2013 at Ehorn-Adams Funeral Home with Rev. Hope Molozaiy officiating. Interment will be in Richmond Cemetery in Richmond with military honors. Memorials may be made to the Community Church of Richmond Endowment Fund 5714 Broadway Richmond, IL 60071, Twin Lakes Fire/Rescue Squad 236 E. Main St Twin Lakes, WI 53181 or Aurora VNA of WI 103 N. Dodge St Burlington, WI 53105. For information please call 815 678-7311 or visit www.ehornadams.com

Edward C. Waspi, 94, of Twin Lakes, WI, formerly of Richmond, IL, passed away Wednesday, November 13, 2013 at his residence. Edward was born in Spring Grove, IL on February 22, 1919, a son of the late John and Lydia (Andrews) Waspi. He was... View Obituary & Service Information

The family of Edward C. Waspi created this Life Tributes page to make it easy to share your memories.

Send flowers to the Waspi family.